YOU decide who is the best footballer on the planet 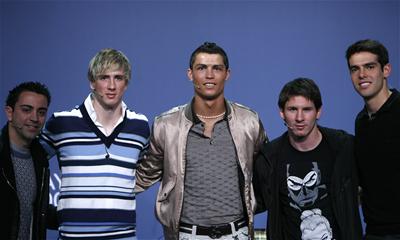 Vote for me! Vote for me!
Nothing gets football fans going as much as the question, “Who’s the best player in the world?” So let’s stop all this idle pub chat and sort it out…
Pies is proud(ish) to announce the first ever “Best Player in the World” World Cup. I’ve chosen who I think are the best 32 players in the world, split them into eight groups of four (just like in the real World Cup) and set out a proper schedule of group “fixtures”, for which it’s up to YOU to vote for the winner.
The Cup will begin on Monday, but I’m posting up the eight groups now, so you can have a think about who you might vote for…

GROUP A
Cristiano Ronaldo
Fernando Torres
Dani Alves
Luka Modric
GROUP B
Kaka
Diego
David Villa
Gigi Buffon
GROUP C
Steven Gerrard
Zlatan Ibrahimovic
John Terry
Karim Benzema
GROUP D
Lionel Messi
Javier Mascherano
Daniele De Rossi
Robinho
GROUP E
Michael Essien
Iker Casillas
Samuel Eto’o
Andres Iniesta
GROUP F
Frank Lampard
Franck Ribery
Andrey Arshavin
Alexandre Pato
GROUP G
Wayne Rooney
Cesc Fabregas
Nemanja Vidic
Didier Drogba
GROUP H
Rio Ferdinand
Thierry Henry
Sergio Aguero
Ryan Giggs
So there you go – I’m sure there are many players you think I’ve missed out, and a few on the list who you disagree with, but this is subjective, not definitive (and you’re the ones voting, after all). That said, I am open minded and if you think you can convince me to change the provisional 32, go for it.
As I said above, the first head-to-head “group games” (aka votes) will take place on Monday. And please, no comments along the lines of “This is stoopid, Ronaldo is the best LOL!” It’s just a bit of fun.