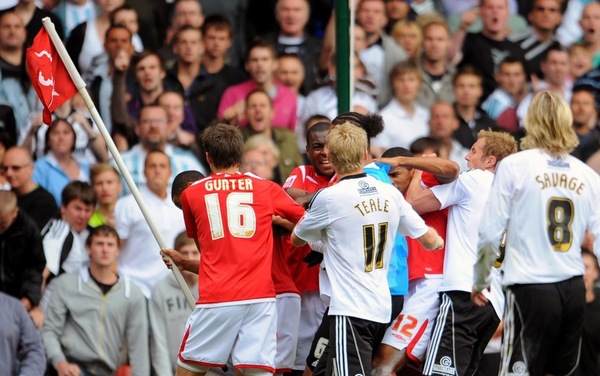 A cracking derby between Nottm Forest and Derby County – which Forest won 3-2, their first win against the Rams in more than six years – was spoiled by post-game handbags between both sets of players.

The scrap was apparently triggered by Nathan Tyson’s ill-judged celebration, which involved waving a corner flag as he ran past the section of the City Ground where Derby fans were sat – to be fair to Tyson, that’s different to waving the flag directly at Derby fans.

It’s easy to criticise Tyson and so, football being a game for simple men, he has been criticised. Derby’s Robbie Savage, of all people, has waded in, calling Tyson a “disgrace” and citing the West Ham v Millwall match as evidence that fans are little more than animals that can’t control themselves.

In other words, what the hell was Tyson thinking, engaging in an act of “mindless incitement” (Savage’s words)?
Disgrace is a bit much, clearly. This wasn’t exactly Graeme Souness planting a flag in the centre circle. Tyson was foolish to wave the flag, but let’s leave it at that.