Saturday evening sees Real Madrid welcoming Barcelona to the Santiago Bernabeu for the first league El Clasico derby of the season and the seventh of 2011, so to whet your appetite we’ve put together a bumper gallery of some of the finest still images the game has produced down through the years. 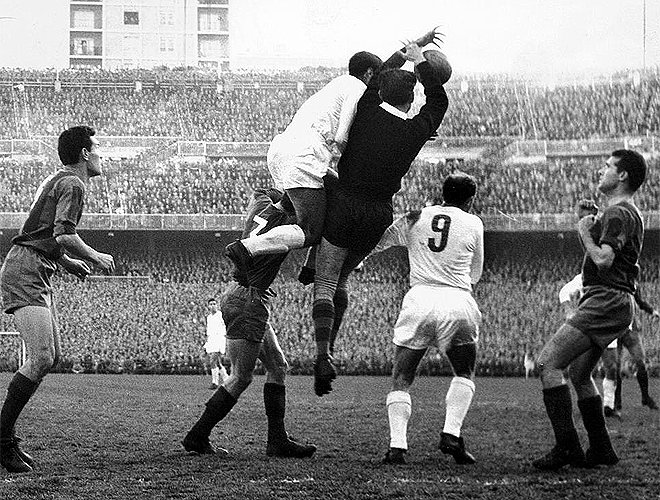 What looks like the referee rises to claim a corner above Real Madrid’s Alfredo di Stefano during El Clasico, 1960 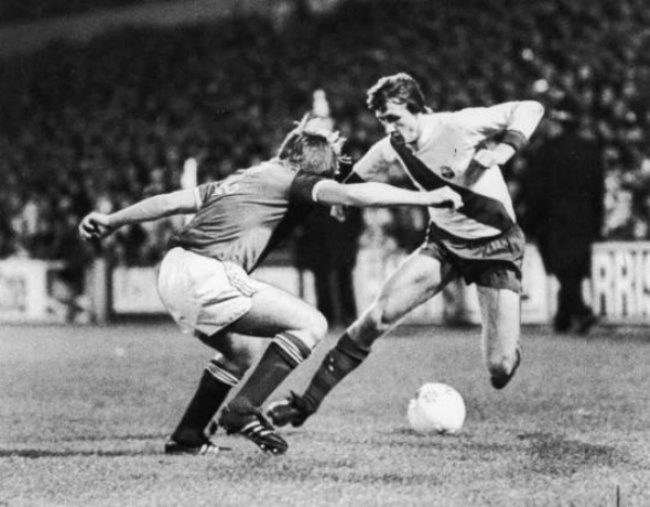 Johan Cruyff of Barcelona (l) darts past his marker, 1974 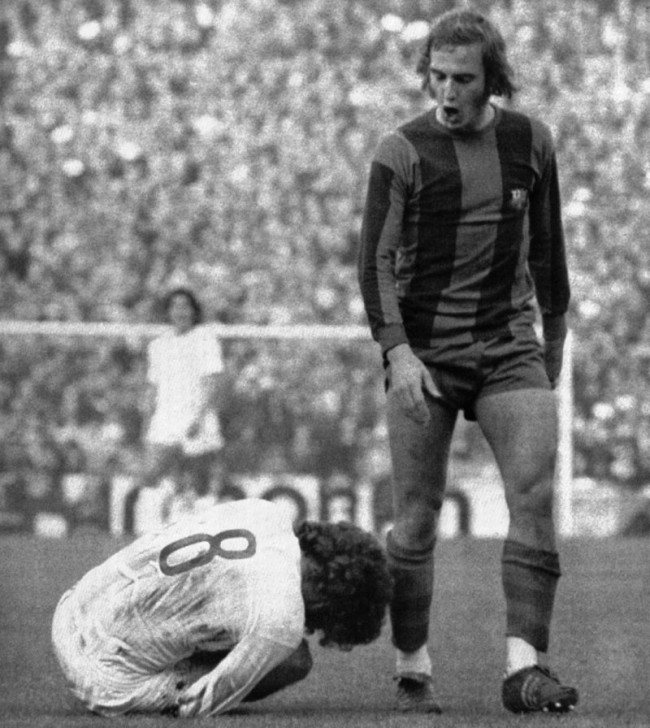 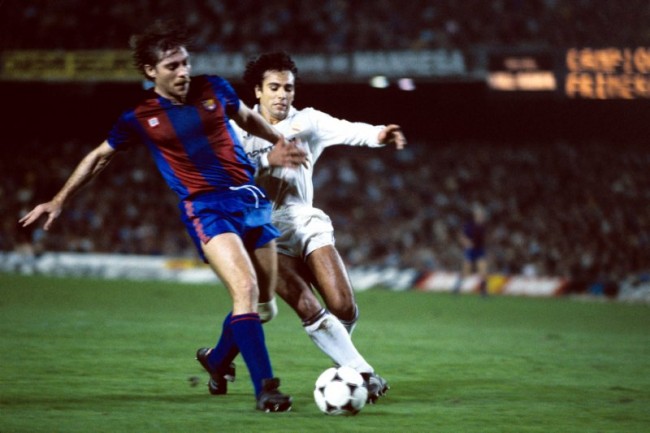 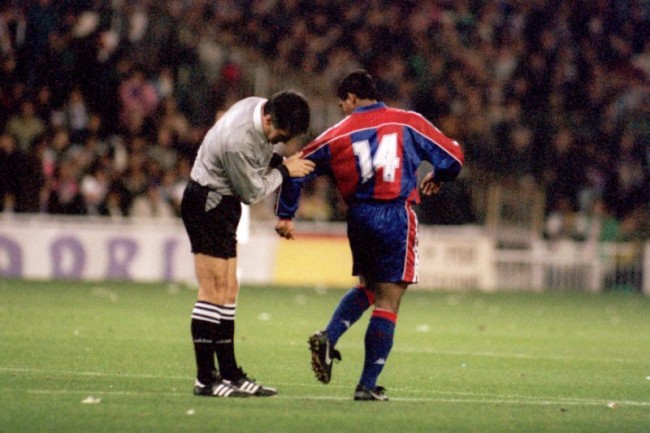 The referee checks the boots of Barcelona’s Romario, presumably for signs of witchcraft, 1994 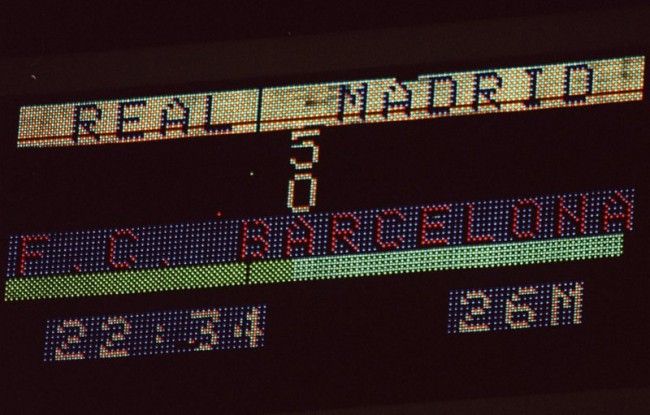 The scoreboard tells the story after Real Madrid hammer Barcelona 5-0 thanks to an Ivan Zamorano hat-trick at the Bernabeu, 1995 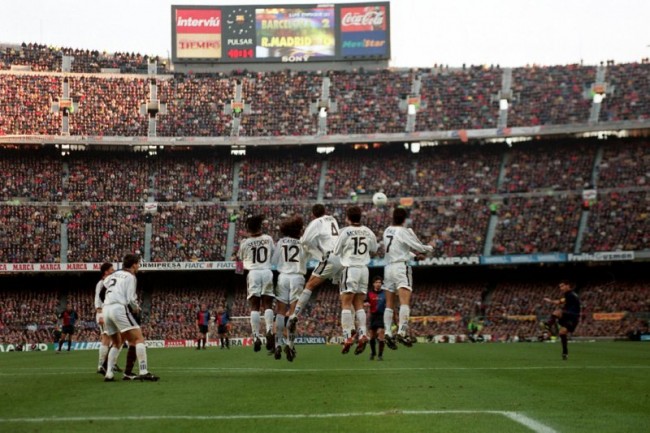 Barcelona’s Figo curls a free-kick around the Real Madrid wall, 1999 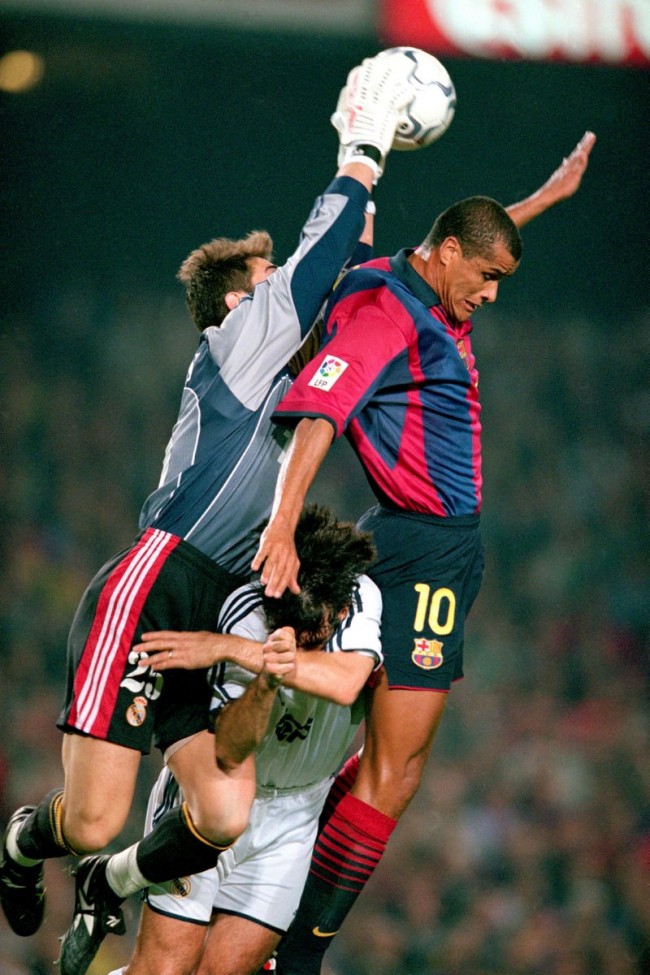 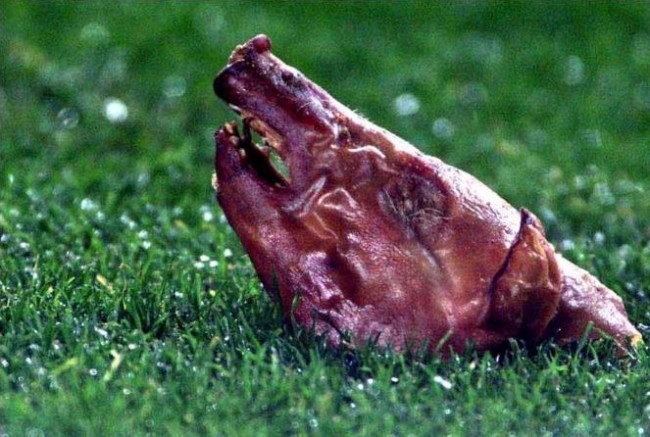 The pig’s head that was thrown (along with a full bottle of whiskey) at Luis Figo during the ‘Derby of Shame’ in 2002. The preserved head is now enshrined in a museum of Barcelona memorabilia. 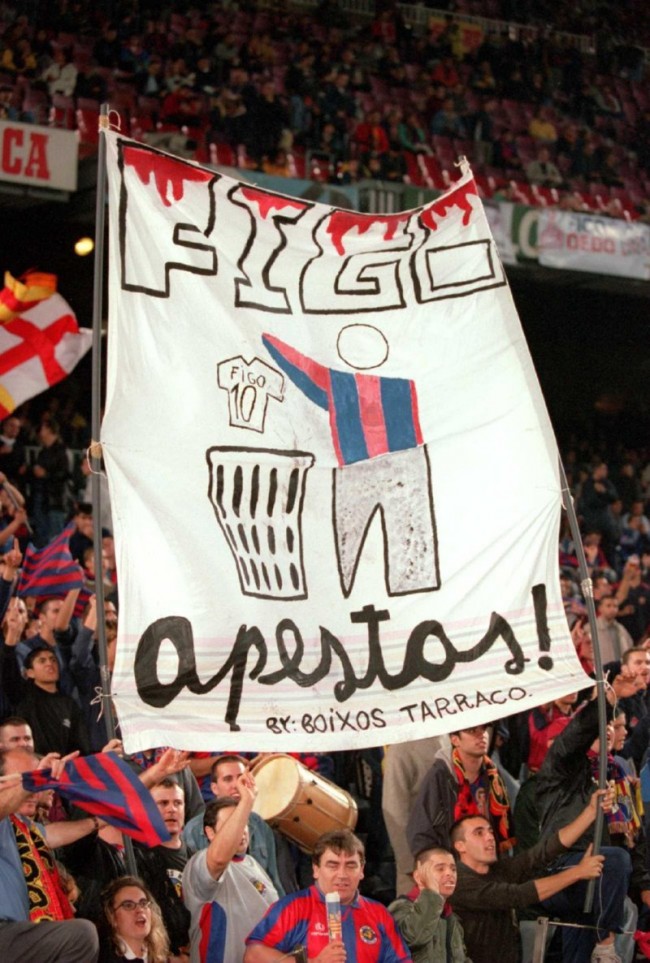 ‘Figo Garbage’ – Livid Barcelona fans vent their anger towards Luis Figo after he ‘betrayed’ them and left for Real Madrid, 2000 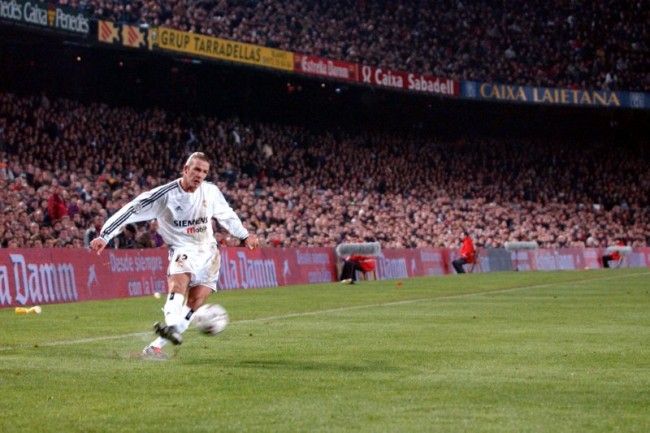 David Beckham slings in a trademark free kick into the box at the Camp Nou, 2003 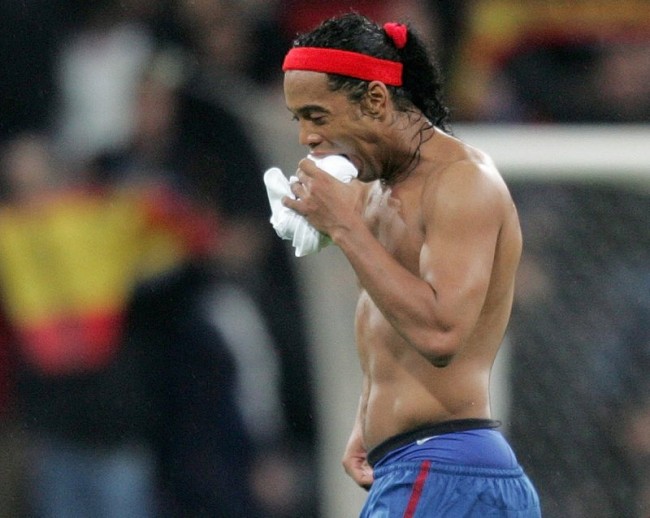 Ronaldinho sets about eating the evidence as he trudges off the pitch with a Real Madrid shirt after losing 2-0 at the Bernabeu, 2006 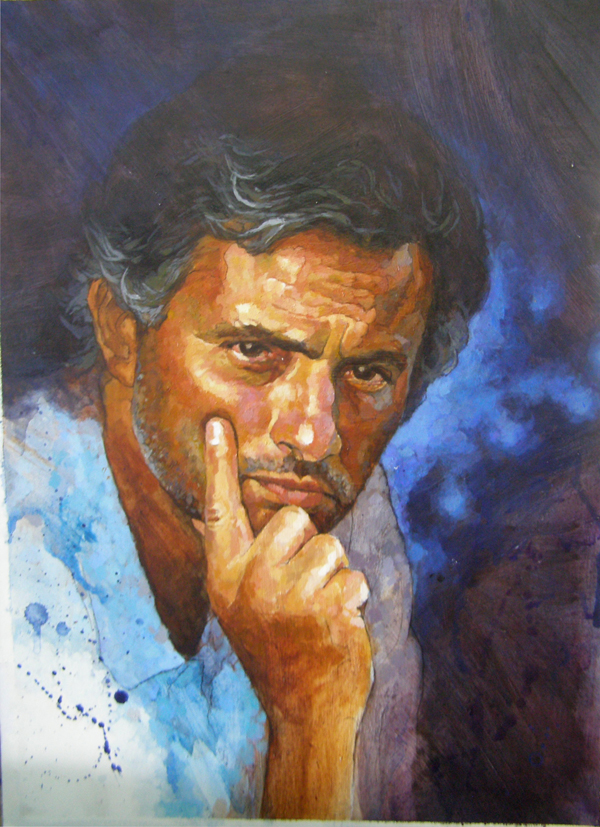 Oh dear, how did that get in there? 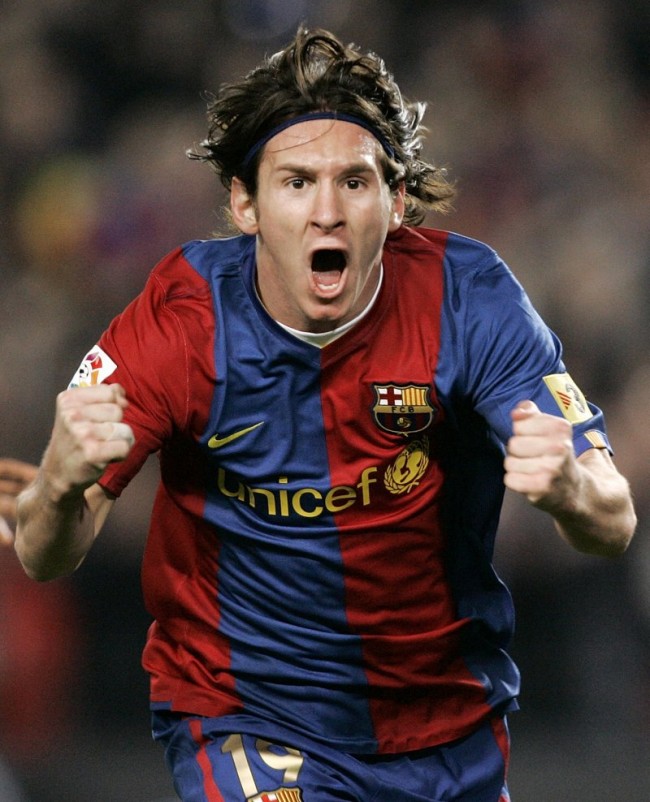 Lionel Messi celebrates the second goal of his hat-trick against Real Madrid (the first in El Clasico since Zamorano’s in 1995) on the night that he truly came of age, 2007 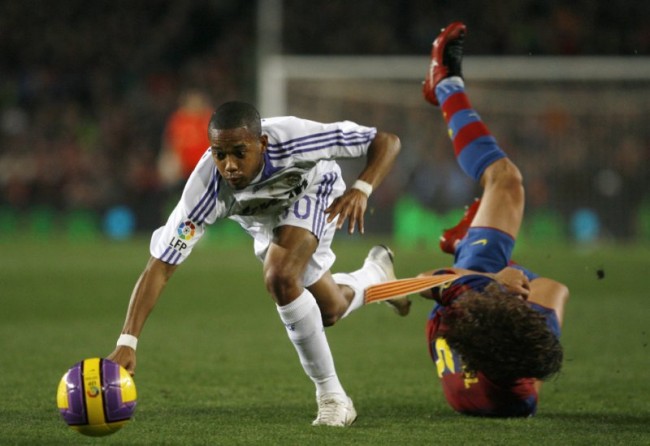 Robinho sprawls past Carles Puyol and takes the Barcelona captain’s Catalan armband with him, 2007 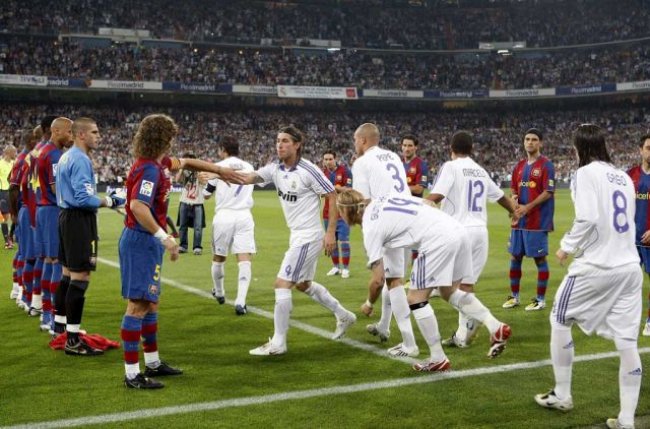 Barcelona form a guard of honour to welcome their opponent’s onto the Bernabeu pitch three days after Real tied up their 31st league title, 2008 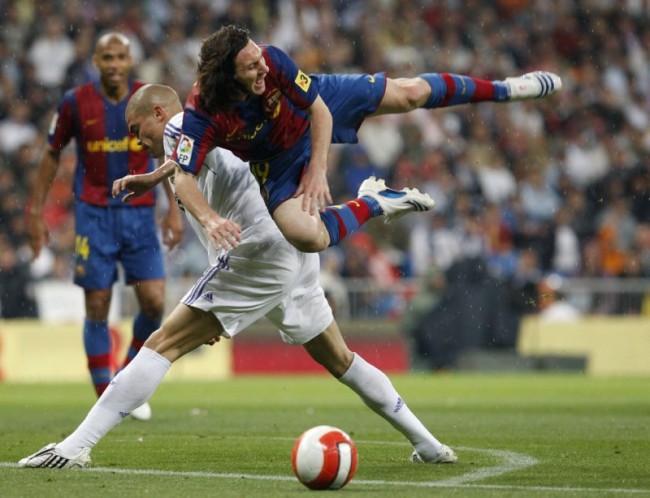 Lionel Messi is hoofed up in the air by Pepe, 2008 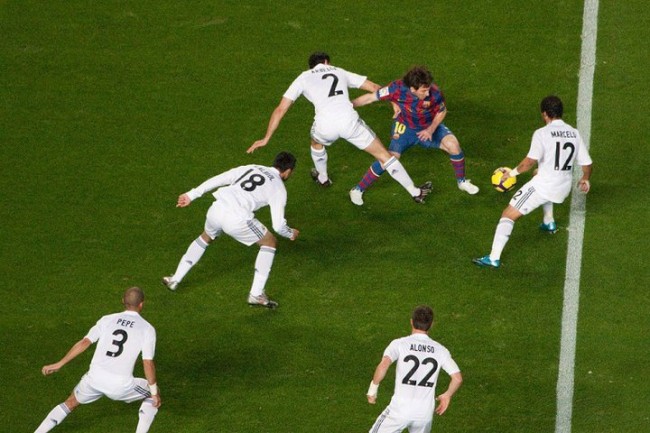 Maradona vs Belgium anybody? Lionel Messi is stalked by five Real Madrid defenders, 2010 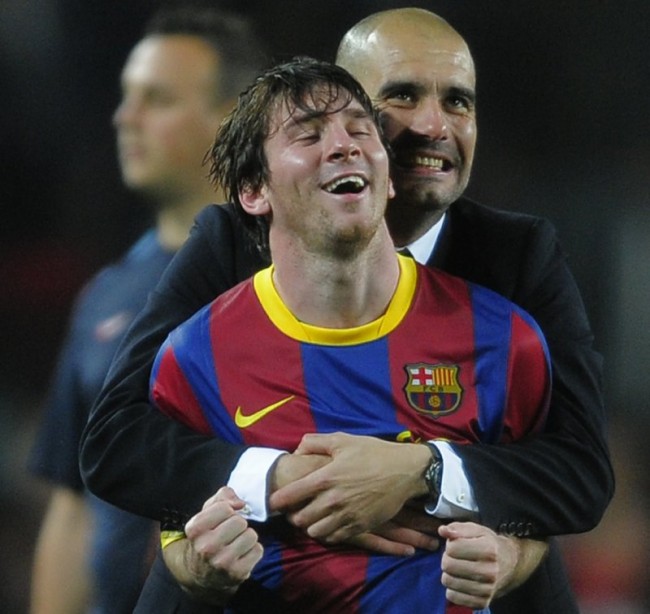 Real Madrid vs Barcelona is live on ESPN Deportes on Saturday, December 10 at 4PM ET.