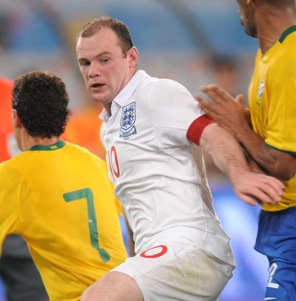 In which Brazil looked effortlessly good, while Enland’s fringe players huffed and puffed to keep the score down.

I still think England’s first XI is just about good enough to reach the World Cup final, but on this showing, the lack of strength in depth is worrying – the likes of Wayne Bridge, Joleon Lescott, Darren Bent, Matthew Upson and Ben Foster (who should have been sent off)… these are not international-class players, at least not of the highest order.

Perhaps the only England player who came out of this game with his reputation enhanced was the lively James Milner, who looks more and more like a shoo-in for England’s final World Cup squad of 23 players.

On the bright side, this was only a friendly and on the face of it, England’s second string managed to contain one of the world’s two best sides (the other being Spain) for most of the match. So let’s keep the doom and gloom on ice for now.

With Frank Lampard, Rio Ferdinand, Joe Cole, Steven Gerrard, John Terry and – hopefully – Owen Hargreaves set to join Wazza Rooney as the key men for England (with D-Becks on the bench), we should quickly forget about this needless fixture in Qatar.