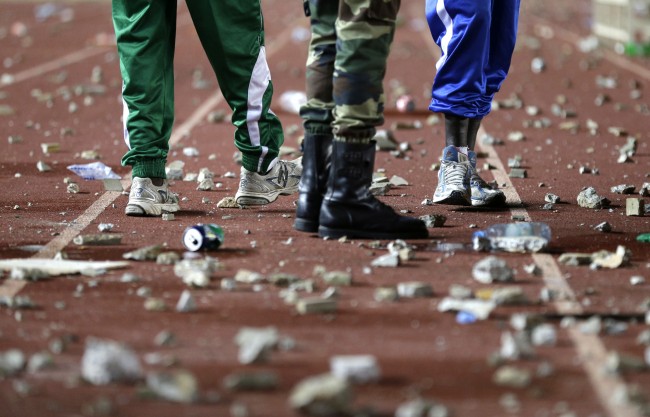 Senegal are facing the threat of being ejected from the Africa Cup of Nations altogether after their qualifier against Ivory Coast yesterday had to be abandoned among a cloud of tear gas when a stadium riot erupted during the game.

With Senegal going 2-0 down on the night (and 6-2 down on aggregate) in the 70th minute to Didier Drogba’s second goal of the evening, angry fans began lighting fires in the terraces and hurling bottles, rubbish, shoes and lumps of concrete down onto the pitch. The game was then suspended for about 40 minutes before being ditched altogether as riot police escorted the players from the pitch and then struggled to contain the aggro erupting around them.

Obviously, Senegal were all but set to bomb out of the tournament anyway but it’s thought that the result (2-0/6-2) will be allowed to stand despite the game being scrapped with about 15 minutes left to play, with heavy sanctions thrown at Senegal to punish them further.