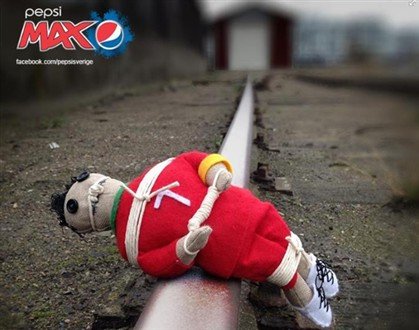 Pepsi’s Swedish subsidiary have been forced to apologise after suffering a rather significant backlash to a series of viral adverts they ran before Sweden’s World Cup play-off second leg against Portugal which featured a Cristiano Ronaldo doll being tortured in many and varied ways.

This, of course, caught Pepsi’s eye and the Swedish-language arm of the company have since taken to their official Facebook page to apologise for their ill-judged adverts, leaving the following statement:

“We would never want to put the sport or the spirit of competition in a negative light. We regret if people were offended by the posts; they were immediately taken down. We would like to extend our apologies to all concerned.”

Anyway, as you’re probably well aware by now, Pepsi’s little faux-pas didn’t seem to affect Ronaldo much, as the Portuguese man-mountain steamed ahead and downed Sweden with a comprehensive hat-trick to send his country through to Brazil 2014.

We think a celebratory can of Pepsi Max is in order.