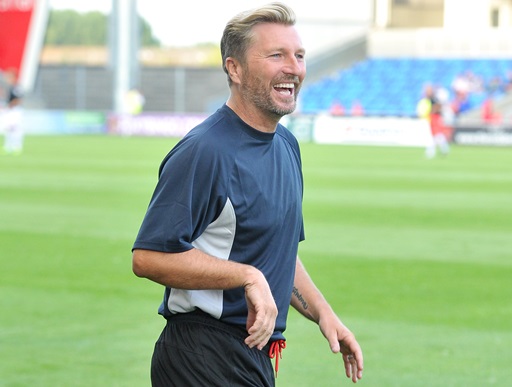 Most have had their say on the relative merits (or lack thereof) of Robbie Savage over the years, but it’s fairly safe to say that “Sav” is only an excruciatingly abrasive prat for professional purposes – with the former Wales midfielder showing his charitable side on Monday afternoon while the rest of the world was suffering deadline day meltdown.

Having received a touching letter from the young lad’s parents, Savage arranged to treat six-year-old cancer patient Eddy Parry to a special spin in his dream car: a red Ferrari

So pleased today I could put a smile on this little fella eddys face ! What an unbelievable little guy ! pic.twitter.com/aEmcoDvJ9E

Since being diagnosed with osteosarcoma (a rare and agressive form of bone cancer) at the age of four, poor little Eddy has been through the mill: undergoing 12 operations to try and treat his disease, having his left leg amputated as well as being forced to undergo 90 high-dose chemotherapy sessions, 35 blood transfusions and 45 scans.

“I get hundreds of letters and emails every month from good causes, but Eddy’s case touched my heart because no child deserves to go through what he has suffered,” he told the Mirror.

“The smile on that little lad’s face was priceless. Eddy’s courage in the face of adversity has been incredible, and I am so pleased I was able to help him have a day to remember.

“I also hope people will sign his father’s petition asking the Government to give a higher priority to care for childhood cancer victims.

“I have two boys of my own, and Eddy’s bravery should bring home to every parent the indiscriminate nature of cancer – and why we must do everything we can to fight it.”