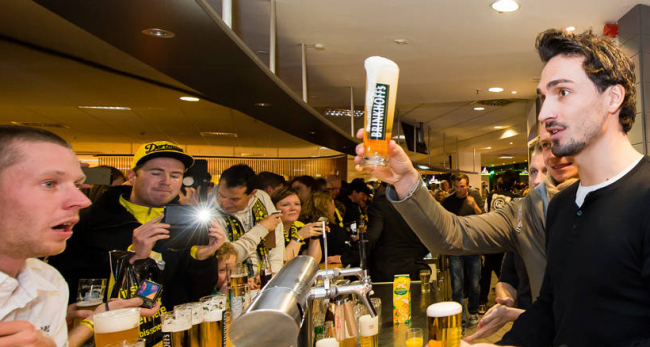 “Pint of Stubby Warlock for me and a Babycham for the lady, please fella”

Presumably by way of an apology for their utterly rancid form so far this year, several Borussia Dortmund players went behind the bar at the club’s annual Christmas party to personally pull pints for fans in attendance.

Every year the club invites 1,000 delegates to the party in the hospitality suite at Signal Iduna Park, which this year saw the likes of Marco Reus, Mats Hummels, Ilkay Gundogan, Neven Subotic and Roman Weidenfeller signing autographs for two-and-a-half hours before stepping behind the bar to serve drinks…

These Bundesliga boys really know how to look after their fans. Top stuff.

There are more photos of the Dortmund players pulling pints (with varying degrees of success!) for the fans here.