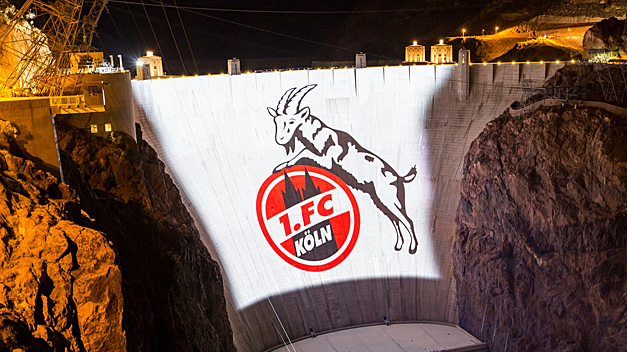 What you see above you is FC Cologne’s club crest being projected, approximately 200-feet tall on the Hoover Dam in Arizona.

Why? Well, it’s all part of a scheme devised by German PR agency Oliver Schrott Kommunikation (OSK), who decided that splashing Hennes the goat across the dam was the best way of showing off the structure’s brand new and extremely powerful lighting system.

OSK, it should be mentioned, are based in Cologne and as such have an inordinately high number of FC Cologne fans among their workforce.

Under the quite wonderful headline ‘Biggest ever Hennes’, the official Bundesliga website confirmed that the enormous Cologne logo covered an area of 39,000 square metres – a new Guinness World Record.

“The fantastic photos of the FC logo on the Hoover Dam are an honour for us and we’re naturally very pleased.”

“It’s great that FC fans are working on such extravagant projects and ensuring that 1. FC Köln has a presence on one of the most famous structures of mankind.

“That is truly something special.”

Cologne striker Anthony Ujah must be made up to see his good friend Hennes hitting such heights.