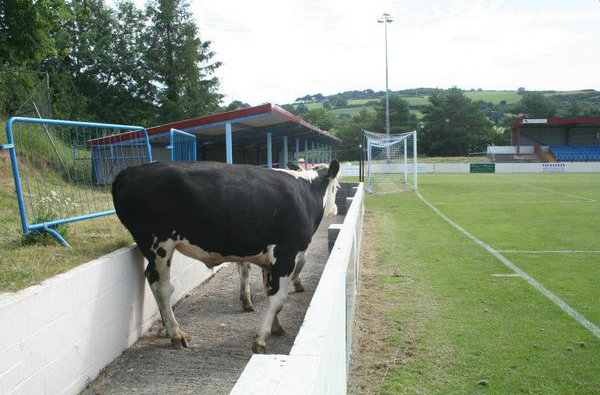 Welsh non-league side Colwyn Bay FC had their pre-season plans plunged into mild peril – mild peril we say! – on Friday morning when the club’s groundsman arrived at their stadium to find the premises had been broken into overnight.

With a friendly against Bolton Wanderers coming up this weekend, Colwyn were dismayed to find that their Llanelian Road ground had been forcefully entered by a group of intruders, clad almost entirely in black, who pushed their way through the gate and ran amok for almost two hours.

Thankfully, the fiendish interlopers didn’t make it out onto the pitch. They’d have probably eaten it otherwise…

We investigated a break in at the club overnight. Thankfully the perpetrators were caught. Don’t get this at Anfield. pic.twitter.com/xP0IkqD6S9

Thankfully, Colwyn’s head of football in the community Matt Sampson and the club’s commercial director Mike Brookes were on hand to protect the turf from the marauding cow herd, who had escaped from a local farm field.

“We were just chilling in the office when they started coming through, and it was one of the most bizarre sights I have seen here,” Sampson told the North Wales Pioneer.

“There was enough here for an 11-a-side game and we were lucky that the pitch was walled off.

“To be honest it’s normally sheep that come into the ground, the place is getting to be a bit like Noah’s Ark.”

Amazing, though we can’t help but feel they’re milking it a bit now.