It would appear that the ciggies have finally caught up to Johan Cruyff with the sad confirmation today that the 68-year-old Holland legend has been diagnosed with lung cancer.

One of football’s most unashamed smokers, there are tales of Cruyff chuffing his way through not one but two cigarettes over the course of a game during his time at Barcelona; one in the tunnel on the way into the dressing room, another in the showers after the final whistle.

“I’ve had to two addictions in my life: smoking and playing football,” he once mused.

“Football has given me everything, whilst smoking almost took it all away”.

Sadly, Cruyff’s words are more poignant today than ever before.

Therefore, it’s with this small collection of photos of Jopie in his pomp, we hope to impress upon you the message that smoking stopped being cool in roughly 1975…

With an obligatory tab on the go, Cruyff relaxes with his Ajax teamates prior to their European Cup tie with Arsenal, 1972 (Photo: Allsport Hulton/Archive)

Cruyff hangs out of the door of his brand new, state of the art Citroen SM, 1972 (Photo by VI Images via Getty Images) 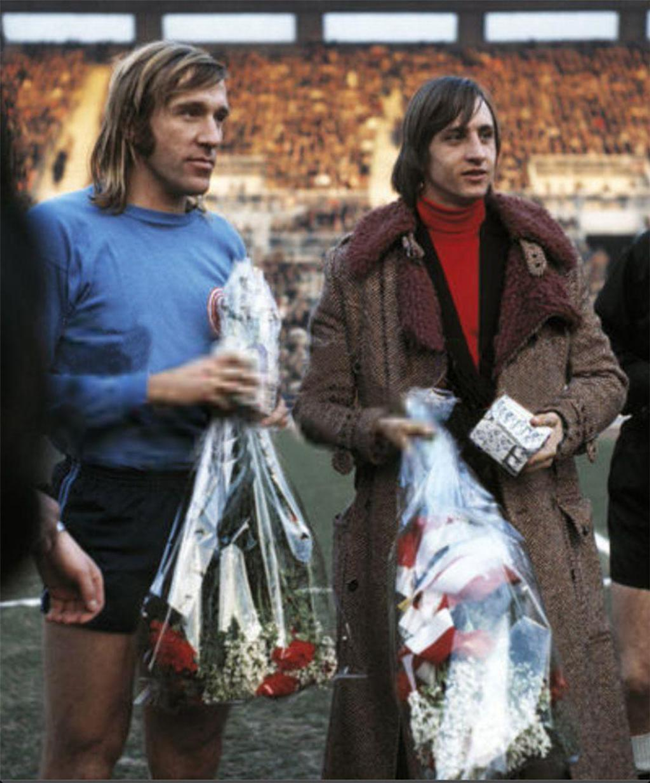 Dressed up to the nines: Cruyff exchanges bouquets with Gunter Netzer ahead of an exhibition match between Ajax and a Fortuna Dusseldorf/Borussia Monchengladbach hybrid team, 1972 (Photo: Ullstein Bild/Getty Images)

Cruyff looking dapper as heck during a photocall for the Dutch national team, 1974 (Photo by VI Images via Getty Images)

Cruyff dons his civvies and takes to the terraces, mid 1970s (Photo by Terry O’Neill/Getty Images)

The epitome of cool, Cruyff cuts a dash at the 1974 World Cup and leaves a trail of perplexed Argentinians in his wake (Photo: STF/AFP/Getty Images)

Barca captain Cruyff is forced to leave the pitch under police escort during a game against Malaga in 1975. The Dutch forward was dismissed after being repeatedly warned for arguing with the referee’s decisions. Malaga eventually won 3-2 (Photo by Central Press/Getty Images)

Barca skipper Cruyff leaves the field to a standing ovation in the 82nd minute of the UEFA Cup quarter-final first leg against Aston Villa at Villa Park, 1978. The match ended in a 2-2 draw (Photo by Bob Thomas/Getty Images)

Cruyff, then of the Washinghton Diplomats, has a casual kick-about with a young Dips fan after a training session, 1979 (Photo by Bob Thomas/Getty Images)

What a player that man was. Ethereally talented and oozing with style.

Here’s wishing him all the best in his fight against the Big C.