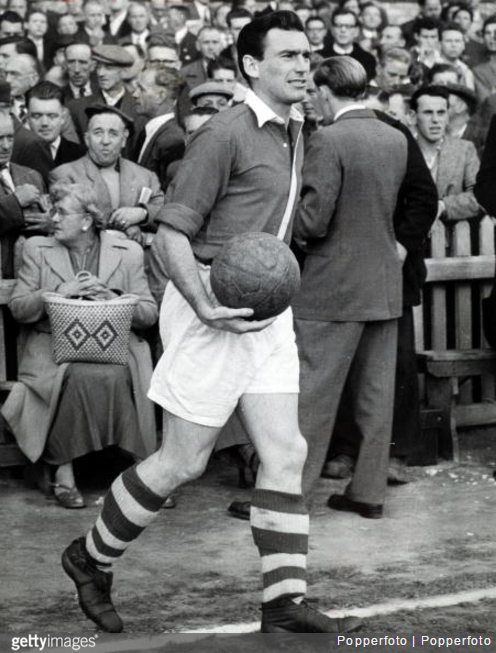 Charlton captain Derek Ufton strides out onto the pitch, 1957

Few footballing fables can match the remarkable story that unfolded at The Valley when Charlton Athletic took on Huddersfield Town in a Division Two game in 1957. Apologies for the cliché, but the words ‘Christmas’ and ‘miracle’ are impossible to resist trotting out.

Things started badly for the home team when centre-half and captain Derek Ufton (pictured above) dislocated his shoulder after 17 minutes. With no substitutes allowed. Charlton had to carry on with 10 men.

At half time, they were 2-0 down and, despite pulling a goal back just after the restart, fell further behind as three more goals took the visitors into an apparently unassailable 5-1 lead with just 28 minutes remaining.

Many of the home fans in the 12,535 crowd had had enough, and left – perhaps picking up some last-minute Christmas shopping before going home to kick the cat. It was not a wise move (leaving early, or kicking the cat).

Within two minutes of Huddersfield’s fifth goal, Charlton pulled it back to 3-5 with a brace of quick-fire goals from Buck Ryan and Johnny Summers. Amazingly, Summers then added another three in the subsequent eight minutes to give Charlton a 6-5 lead. But the story was not over.

With four minutes to go, Stan Howard equalised for the Terriers – and then, incredibly, with just seconds remaining, than man Ryan popped up again for the Addicks to secure an incredible 7-6 victory.

From 1-5 down to 7-6 winners in the space of just half-an-hour. Truly, truly astonishing.