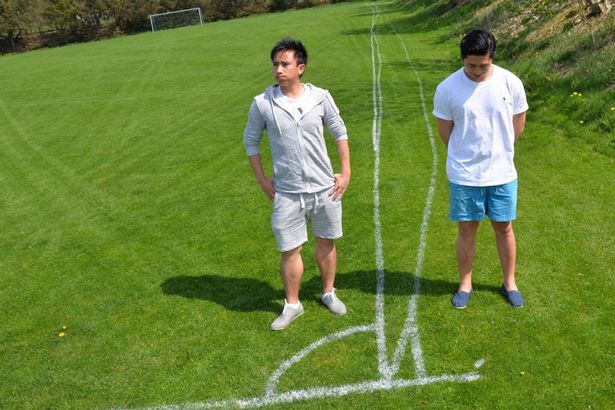 The two thoroughly sheepish gentlemen you see afore ye are none other than Quang Minh Ha and Nick Duy Do, otherwise now known as the worst groundsmen in the entire world.

The hapless pair were tasked with marking out the pitch just 30 minutes before the recent Norwegian 7th-tier game between Julebygda and Riska 3 was scheduled to kick-off.

As is about to become abundantly apparent, Quang and Nick had no earthly idea how to go about painting out the necessary lines so basically just freestyled the whole thing, leading directly to the creation of this absolute abomination… 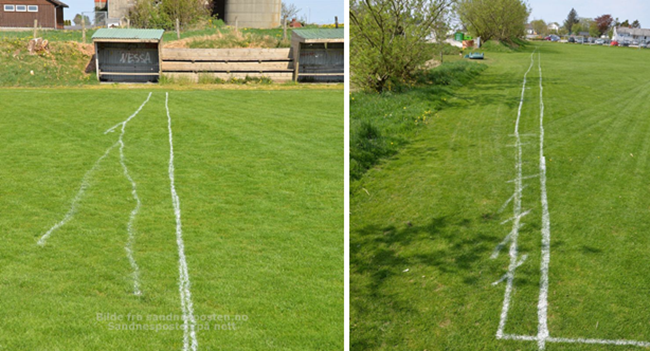 Images of the dynamic duo’s work quickly went viral in Norway, with Quang admitting to TV2: “It’s probably the first and last time we get this job.”

Yep. Ironically, he’s probably not too wide of the mark there.

Just to put in perspective how skewiff the marking was, one penalty spot was daubed 13 metres from the goal while the spot at the other end was just 8 metres out. For the record, the official measurement is supposed to be 11 metres.

Quang also told TV2 that they didn’t even bother attempting a centre circle as it was just far too daunting.

It all brings to mind the similarly lopsided work of the Romanian groundsman we featured on Pies a year or two back, though at least he had a good excuse for his wonky touchlines being all over the shop – he was pissed out of his skull!