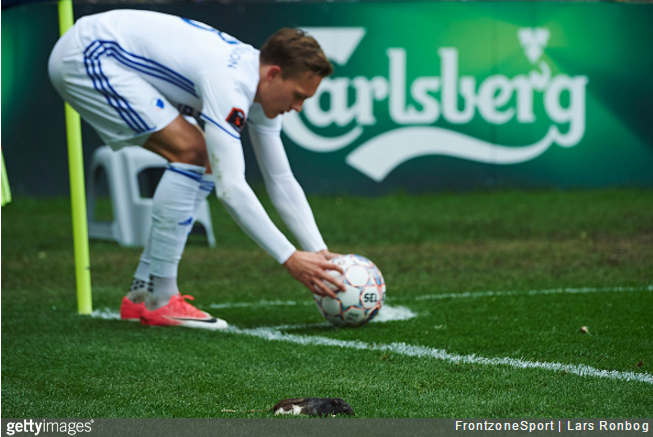 Monday’s lively Danish Superliga derby between rivals Brondby and FC Copenhagen was interrupted momentarily when a rather gruesome volley of projectiles was flung onto the pitch.

As Copenhagen left-back Ludwig Augustinsson (awesome name) was shaping up to take an 85th-minute corner kick, a couple of dead rats were hurled in his general direction.

Rather that being overly phased, Augustinsson simply attempted to kick the rats back from whence they came…

Eventually, stewards removed the rodents and play resumed as Copenhagen went on to win the match 1-0.

After the final whistle, Brondby’s sporting director Troels Bech was left to condemn the conduct of the fan(s) responsible:

We are obviously annoyed that we had to leave the field without points, but it is equally unfortunate that there are some visitors for today’s match who could not figure out how to behave properly.

We will now look all the video material and pictures … [and] will engage in dialogue with groups of supporters in the hope that together we can identify the right person and make sure he/she gets removed from the stadium.

We have Denmark’s most atmospheric football stadium and … by far the best fans, and a single individual should not ruin it for the greater community.

Secondly – who in their right mind smuggles rat carcasses into a football match?