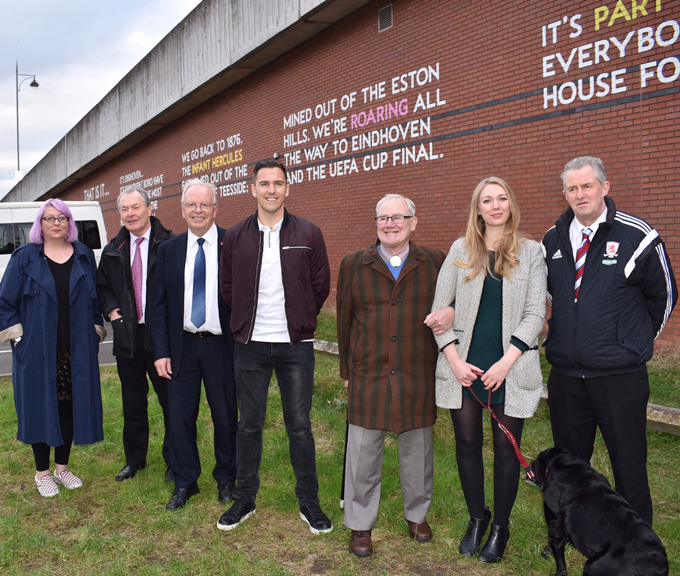 Brownlee was the voice of Boro’s highs and lows for three decades, with his impassioned, ecstatic, sometimes delirious delivery earning him bona fide cult hero status.

As such, the club, in conjunction with Middlesbrough Council, have daubed a huge mural along the entire wall of the Shepherdson Way bridge, right next to the Riverside Stadium.

The text is taken from Brownlee’s immense monologue, yowled through the tears while watching Boro come from three goals down to beat Steaua Bucharest and go crashing into the 2006 UEFA Cup Final – commentary that famously ended with him inviting everybody back to his for a parmo (Google it).

We go back to 1876, the Infant Hercules, fathomed out of the foundries of Teesside, mined out of the Eston Hills, we’re roaring all the way to Eindhoven and the UEFA Cup Final.

It’s perhaps fitting that Stewart Downing was on hand to help unveil the mural outside the stadium, as it was his deep cross that Massimo Maccarone headed home in the 90th minute to seal the remarkable victory.

I had to be here. Ali was a legend and everyone knows about that commentary. I remember the game, the night and what it meant as if it was yesterday.

Mind, there were a few!

The artwork was produced by professional sign writer Phil Anderson and is part of the Middlesbrough Public Poetry initiative, which has already seen several bits of street art dotted hither and thither around the city.

Honestly, it’s the least Brownlee deserves, not that Boro fans would ever forget him anyway.