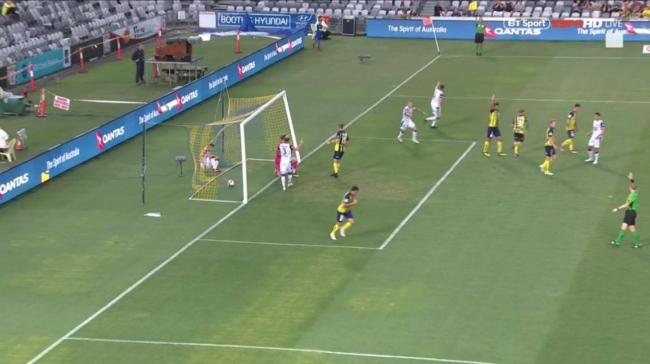 Australian A-League side Central Coast Mariners have endured a difficult start to their season, currently finding themselves bottom of the table and without a win after 10 games.

In their 1-0 defeat at home to Perth Glory, their current situation was perfectly encapsulated by bizarre scenes which saw one of the goals at the Bluetongue Stadium collapse.

The incident occurred when Glory defender Tomislav Mrcela looked to have headed home, only to be denied by an offside flag.

However, the strapping defender continued running into the goal after the headed effort, duly breaking one of the posts on his way and ultimately causing the whole frame of the goal to collapse…

As feeble as the Mariners’ defence, the whole goal needed replacing, which caused a long delay, with the players eventually heading back into the dressing room.

12’ | We will take a break whilst the goalposts are tended to. We’re sure this would already be sorted if we had the help of Kosta Barbarouses tonight 👀 #CCMvPER #CCMFC #ALeague pic.twitter.com/2Vc6CiuJ1r

The game would eventually restart, but only after temporary goals had been set up.

The poor old Mariners would also go on to lose the game 1-0.

Things can surely only get better for the struggling club!