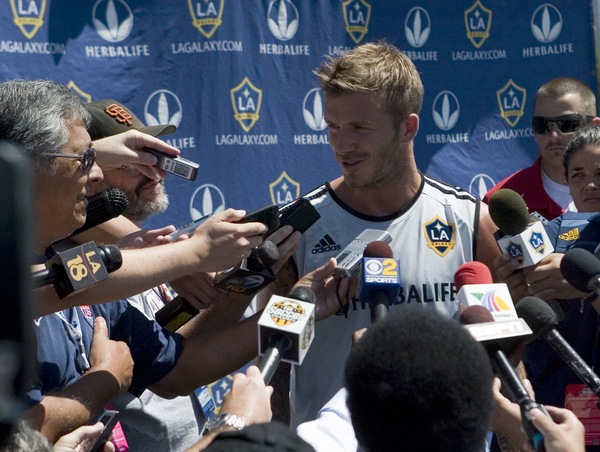 Becks is back in training for LA Galaxy. Here he faces the usual array of media microphones. [Photo: PA]
Yesterday Dave had his first training session with the Galaxy, after returning from his loan spell in Milan. His public feud with team-mate Landon Donovan was the issue on every reporter’s lips, but Becks claimed that ‘we cool, just like two Fonzies’ (not his exact words).
Indeed, Becks and Landycakes had a frank conversation, alongside Galay coach Bruce Arena, during which there was a significant amount of kissing and making up.
‘I’m not going to talk about what was said,’ Beckham said. ‘That was between me, Landon and the manager – but we had a good talk.’
Beckham is set to play his first game of the season for the Galaxy on Thursday, when the MLS side travel across country to face the NY Red Bulls at Giants Stadium.