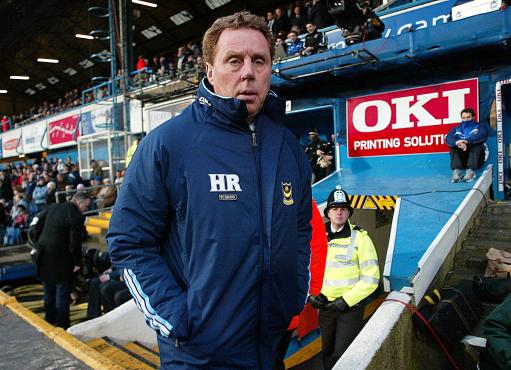 With thirty large stashed down his strides, ‘Arry fixes up and looks sharp with the filth on the prowl

As we told you yesterday, Harry Redknapp’s new book, “My Top, Top, Triffic Autobiography”, is being serialised in the Daily Mail this week and today’s excerpt is a corker – containing the story of the day our compelling protagonist found himself with £30,000 of Paul Merson’s money hidden down his trouser leg for the entire duration of Portsmouth’s game against Millwall at the New Den back in March of 2003.

Here’s ‘Arry with the anecdote:

“One day at Millwall, [Merson] came into the dressing room with a big, brown bag full of readies. ‘Would you look after this for me, gaffer?’ he asked.

“‘It’s 30 grand. It’s for a bookmaker, an Irish mob. They’re after me and I’ve got to meet them after the game. Will you look after it for me until then?

“I couldn’t leave it in the changing room, but I almost always wear a suit on the touchline. That day I changed. I put a tracksuit on so there was more room to conceal these readies.

“It was OK until I sprung out of my seat on the touchline. As I did, I felt something move. As I was trying to get a message to the players I could feel Merson’s 30 grand making its way south along my trouser leg.

“I looked down and the notes were coming out the bottom of my trousers.

“I edged back to my seat like a bloke who needed the toilet quickly. The staff were very concerned.

“‘Are you all right, Harry?’ I was virtually doubled up, as if in pain.  I slid into my seat and didn’t move, stuck in this awkward position in case the money moved again.

“The staff kept asking if I needed to see the doctor, and I kept telling them it was nothing, I was fine, I just needed to be left alone. I was rooted to the spot.

“We ended up winning 5–0 and Merson got cheered off by the Millwall punters, he was that good.

“It wasn’t the only result he had that day. He told me afterwards that the money he owed was nearer £100,000 than £30,000 but the bookmakers had decided to cut their losses.

And if any of that surprises you in any way, shape or form then please allow us to be the first to welcome you on your first day here on planet Earth.