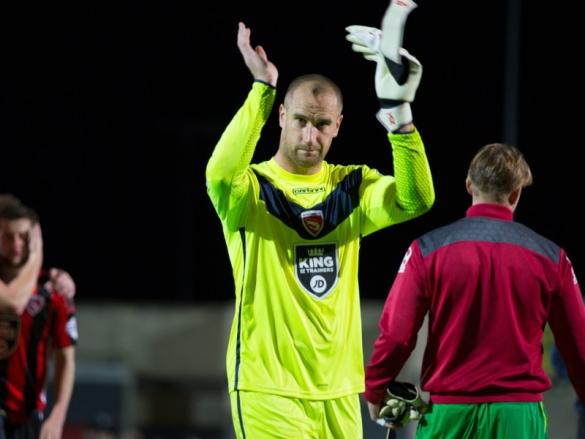 Morecambe managed to salvage a point at the very death against Portsmouth last night, though the dramatic 94th-minute equaliser came from a thoroughly unlikely source in ‘keeper Barry Roche.

A goal down and with injury time dwindling away, the ex-Nottingham Forest stopper went steaming up the pitch for a late corner and, hey presto, got his head on it to snatch parity from the jaws of defeat.

Welcome to the Ancient Masonic Order of the Goal-Scoring Goalies Knights Templar.

Speaking to the Morecambe Visitor after the game, Roche revealed that while he was buzzing to have broken his goal-scoring duck at the age of 33, he had absolutely no idea what to do after the ball hit the back of the net.

I hadn’t got a clue what to do. I thought about doing a Klinsmann dive but the pitch is too dry so I just jumped and then there was the pile on of all pile ons.

I couldn’t breath so I had to throw a few off me but it’s a great feeling.

Just a word to the wise, Barry. If you intend to make a habit of this goal-scoring lark, then crushing asphyxiation probably isn’t the best way to go about celebrating.