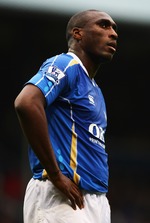 Sol Campbell, still a Judas to many Spurs fans after he left them for Arsenal (Gooners didn’t seem to mind so much when he left them for Portsmouth), called a Radio 4 phone-in to complain about the level of abuse he and other footballers have to put up with.
‘It’s out of hand now,’ Campbell told Radio 4. ‘We can all take the booing or light banter, but when it gets to the realms of verbal abuse it’s a bridge too farâ€¦ If this happened on the street you’d be arrested. The FA, the PFA and even the government should get involved.’
Campbell, Harry Redknapp, Avram Grant and Alex Ferguson have all had a moan about abuse they’ve received from the stands this season (though Fergie can dish it as well as take it). Is this getting out of hand, or is it no worse than it always was? Have your say after the jumpâ€¦

Are we entitled to swear at players we don’t like, or suggest that someone’s wife ‘takes it up the a**e’? As Sol says, if we did it in the street we’d get a punch on the nose – or worse â€“ for our troubles. The fact is, the majority of Spurs fans wouldn’t have the balls to go up to Sol Campbell in the street and call him a Judas to his face. Football fans hunt in packs; it’s easy to be brave with thousands of like-minded people sat around you.
When I’m at a football match, I might go so far as to shout ‘You’re f**king shite!’ at a player, or ‘What the hell was that?!’ but there is a level of abuse that is unacceptable, specifically abuse that is racial and homophobic, or just plain offensive.
No matter that players and managers are well-paid to entertain us â€“Â they don’t deserve the amount of crap that some idiots dish out. Not even Cashley Coleâ€¦