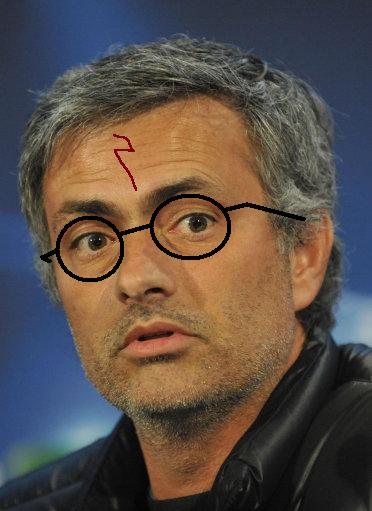 Despite mounting speculation to the contrary, Real Madrid manager Jose Mourinho has once again refuted claims that he is child magician Harry Potter.

Speaking after his sides’ opening-day goalless stalemate with Real Mallorca (a result that can best be described as ‘underwhelming’, given the preceding fanfare), Mourinho urged the Real fans to remain patient and allow his new squad time to gel;

“Look, I’m a coach, I’m not Harry Potter. He is magical, but in reality there is no magic. Magic is fiction and football is real.

Mourinho has already added Ricardo Carvalho, Mesut Ozil, Sami Khedira and Angel Di Maria to his ranks during his short stint in charge at the Bernabeu, and believes that the entire squad need to get used to training together before results start to show on the pitch;

“I have been in Madrid a couple of months and we’ve had 40 training sessions. Do you know how many training sessions we have had together, including the new signings? Not 10. I repeat: not 10.

The easiest thing for me would have been not to change anything,” he said, “to play like we played last year and keep the structure that already existed. That would have been easier to start the season, but it would have been misleading. That’s not the direction that I want to go.”

The Portuguese coach also told Spanish rag AS that he wasn’t overly concerned with the result of his first Primera Division against Mallorca, insisting that opening fixtures have little bearing on the rest of the season;

In Porto we then won four titles and at Inter we got two in the first season and three titles in the second. I do not see a draw as a drama on the first day. Winning this game was not a pre-requisite for a great season. But I’m not going to lie, obviously I wanted to win my first game.”

Mourinho left new signings Ozil and Khedira on the bench at Mallorca, explaining that he wanted to give the pair time to settle into their new surroundings before throwing them into the action;

“It’s not easy for the Germans. They do not speak a word of Spanish. They can just say ‘buenos dias’ and ‘hola’. The work we do is intense and luckily I have an assistant who speaks some German and has given them my instructions.

But it’s not easy for my message to get across as I wish. In addition, the social life of the group is still zero for them. Patience. Give them time.”

And you know what? I think I will.