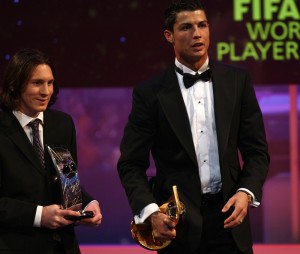 Cristiano Ronaldo says that Lionel Messi is the favourite to win this year’s Ballon d’Or, also known as the European Footballer of the Year award. (The winner will be announced on December 1; Ronaldo is the current holder of the title)

In an interview with France Football magazine, C-Ron said: “Messi is the favourite. Why not him? If he wins it, it will be well deserved.”

“The favorite is a player from Barcelona,” he added. “To win a trophy like this, you need to have won collective trophies, a league title, the Champions League. That’s why many players from Barcelona could win it.”

Why, that’s mighty big of Ron. Perhaps moving to Madrid has taken an edge off his arrogance?

After the jaw-dropping season Barcelona had in 2008/09, it would appear that Messi is a shoo-in for the award, and deservedly so – though he’s in competition against five Barca team-mates in the voting: Xavi Hernandez, Thierry Henry, Andres Iniesta, Yaya Toure and Zlatan Ibrahimovic.

My top three (all Barcelona):

What is your top three folks?