As dug up by our brethren over at Anorak, here’s a handy cut-out-and-keep guide to spotting the new breed of casually-dressed football hooligan, as printed in The Daily Mirror (we think, though we may be wrong) in the 1985… 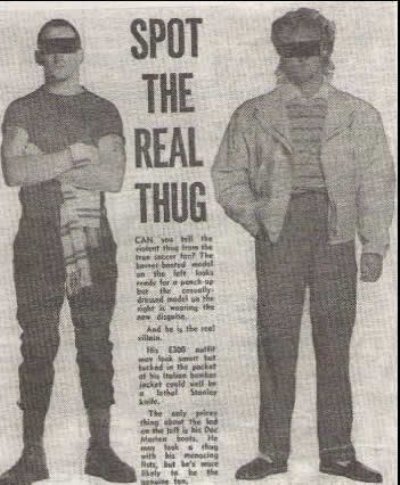 “Can you tell the violent thug from the true soccer fan? The bovver-booted model on the left looks ready for a punch-up but the casually dressed model on the right is wearing the new disguise.

“And he is the real villain.

“His £300 outfit may look smart but tucked in the pocket of his Italian jacket could well be a lethal Stanley knife.

“The only pricey thing about the lad on the left is his Doc Marten boots. He may look a thug with his menacing looks but he’s more likely to be the genuine fan.”

So now you know, and knowing is half the battle.