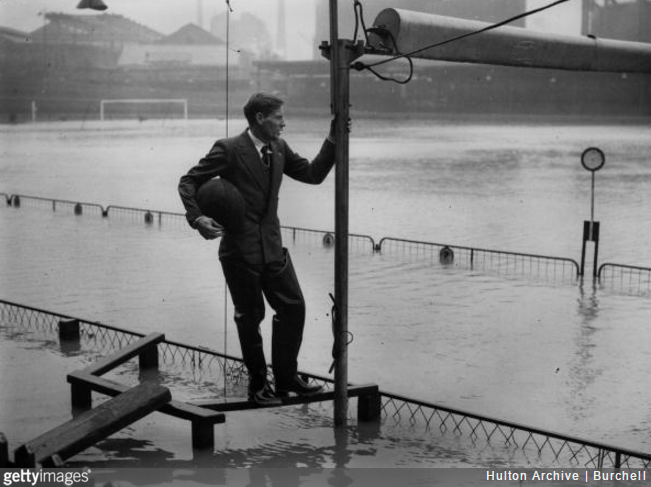 “Think we’re going to have to call it off, lads…”

Little old Newport County don’t often get a mention in these parts, so we’re taking the opportunity to remember a couple of odd occurrences at the team’s Somerton Park ground in the early-to-mid 20th Century.

The first we’re going to bring up came on Good Friday (23rd March, to be specific) in 1951. County had raced into a commanding 5-1 lead over second-placed Norwich City in a top-of-the-table clash in the old Division Three South. The two points were in the bag.

However, with 15 minutes left to play, Norwich defender Reg Foulkes injured himself while heading a rain-sodden football and the referee decided there and then to abandon the match altogether.

Suffice to say, the home fans were not happy. The ref had to be smuggled out of the ground disguised as an ambulance man. The match was then replayed the following month and drawn 1-1.

A little over 25 years before, the Newport crowd managed to exert its collective influence on another ref who decided in his wisdom to abandon a game mid-match.

It was the first time any such thing had happened at Somerton Park. It was a cold, stark afternoon in November of 1923 and Queens Park Rangers were the visitors to South Wales.

On the morning before kick off, a thick fog descended over the pitch, but the ref decided to press ahead regardless. After just a few minutes, with visibility less than 20 yards, he took both teams off the pitch.

According to press reports, the crowd “expressed forcible criticism” to this decision so the official, to use the common vernacular, bottled it and resumed play.

Both teams scored, with only the fans right on the goal line able to see the ball hit the back of the net.

The match was finally properly abandoned 40 minutes later as the fog was became so thick the two teams may as well have been playing badminton.