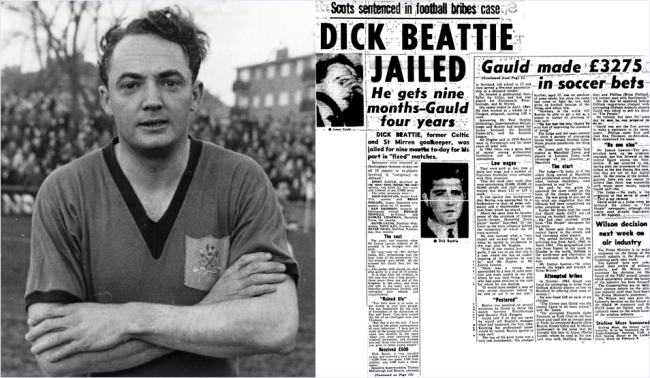 On the morning of the 12th April, 1964, the Sunday People newspaper broke one of the most sensational scandal stories in British football history.

The paper revealed that a syndicate of professional footballers had colluded to fix matches on which they’d bet on the outcome of. The story was eventually to lead to the jailing of 10 players for a string of offences.

The sensation had been brewing for years, and when the story broke it rocked the game to its foundations. At the epicentre was Jimmy Gauld (above), a former player with Swindon, Plymouth Argyle, St. Johnstone and Mansfield Town.

In 1962, he had approached Sheffield Wednesday’s David Layne and suggested Wednesday lose their upcoming game against Ipswich Town. Layne enlisted the help of fellow players Tony Kay and Peter Swan. All three bet against their own team, and the Owls duly went on to lose 2-0.

It later transpired that Gauld’s syndicate had fixed two other games on the same day – Lincoln versus Brentford, and Oldham versus York.

The following year in 1963, Ken Thomson of Hartlepool United confessed to the People that he’d bet, using the syndicate, on a game between his side and Exeter City.

The paper was able to name Gauld as the mastermind behind the insidious operation, and the following year Gauld spilled the beans on the whole caboodle when he sold his story to the same paper for £7,000.

He told the tale in a series of taped conversations, and those tapes were used to convict Gauld and nine others in a trial at Nottingham Assizes in 1965. It was the first time taped evidence was used in an English court.

Gauld got four years in prison for his crimes. The nine others received sentences of between four and 15 months. All ten of them were banned from football for life.