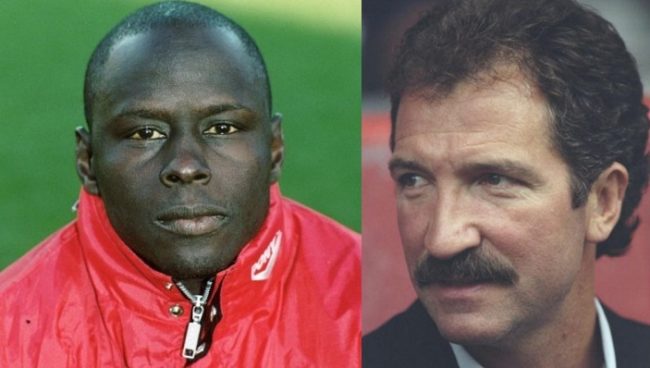 Despite only ever playing less than an hour of top flight football, there can be no doubt that Ali Dia is a Premier League legend in the truest sense of the word.

For the uninitiated (presuming there are any), Dia was signed by Graeme Sounness in 1996 after the shrewd Southampton manager received a personal tip-off from Dia’s cousin, the similarly legendary George Weah, that the unknown Senegal forward, currently playing in the local non-leagues, was well worth a gamble.

Alas, it transpired that “George Weah” (who, it should be pointed out, actually hails from Liberia – some 2,000 miles down the African coast from Senegal) was actually just one of Dia’s university mates, who somehow got hold of Sounness’ phone number and simply posed as the former AC Milan striker to deliver a glowing endorsement of Dia’s abilities.

“He played with George Weah at PSG, and last year he was playing in the second division in Germany… so we’re having a look,” Souey optimistacally told the cameras while announcing Dia has been taken on trial.

After a couple of training sessions, Souness eventually brought Dia on for his Saints debut against Leeds in November of 1996, replacing the injured Matt Le Tissier with just 20 minutes gone.

In fairness and despite all the odds, Dia lolloped around willingly right up until the 85th minute, when an ambarrassed Souness finally summoned up the gumption to sub him back off again.

Anyway, almost exactly two decades on from that fateful day, Dia – who promptly left Southampton, enjoyed a brief stint at non-league Gateshead and then dropped off the radar entirely – has been tracked down once again.

It was Bleacher Report sports writer Kelly Naqi who put the hard yards in, even travelling to meet Dia’s parents in Dakar in her efforts to reestablish contact with the Premier League’s most elusive, nigh-on mythical cult hero.

We’ve found Ali Dia. It is time to finally tell the complete story of the Premier League’s most unlikely ever player https://t.co/bPL2uChcz9 pic.twitter.com/3wUVqQx0ns

Naqi eventually managed to contact Dia and though he was initially unwilling to revisit his brief flirtation with English top-tier football, she eventually made inroads – even discovering that we’ve all been getting his name wrong for 20 years.

Turns out it’s Aly Dia, not Ali Dia… and he’s been living and working in London (in the business sector) for the past several years.

Here’s what the great man had to say for himself:

They have portrayed me as a liar, and that is bull.

I trained against the [Southampton] first team, on the reserve team, for two weeks. They knew my abilities.

There was a final game before the Leeds game—11 on 11—and I scored two or three goals. I was on fire.

I earned the spot to be there. Souness said, ‘You are in for tomorrow, be ready.’ I was not expecting to start. Then the next thing you know, Le Tissier gets injured and I go in. No warm-ups, I just go in.

The rest as they say, is history – but does Dia have any qualms about the manner in which he attained his immortality?

I have a clear conscience. God is going to be our judge.

We’ve got bad news for you Aly, old bean: Le Tiss has already had his say, and it turns out he’s not your biggest fan.

Kelly Naqi’s full piece is available to peruse here and we strongly recommend that you do just that.