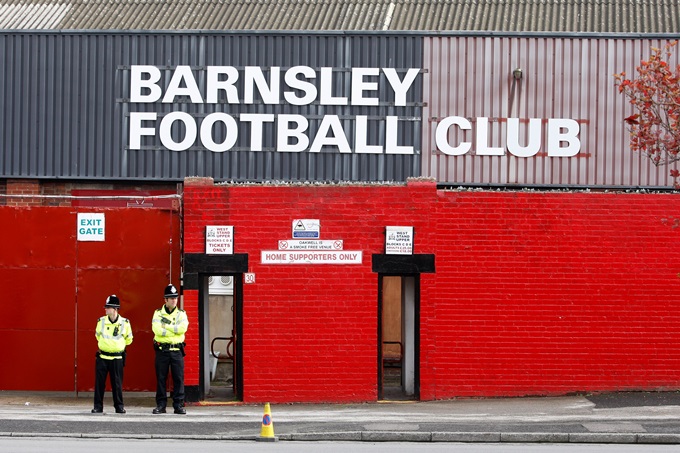 With the National Front (NF) on the rise in Britain and right-wing thuggery becoming rife on the terraces in the 1970s, many groups of concerned football fans took it upon themselves to make a defiant stand.

Following the creation of the Anti Nazi League (ANL) in 1975, activist supporters of many different football clubs formed their own sub-sects to help prevent their respective stadiums being used as NF recruitment centres on matchdays.

Barnsley also did their bit in the fight against matchday fascism, and here’s an example of the anti-Nazi literature being circulated at Oakwell circa 1978… 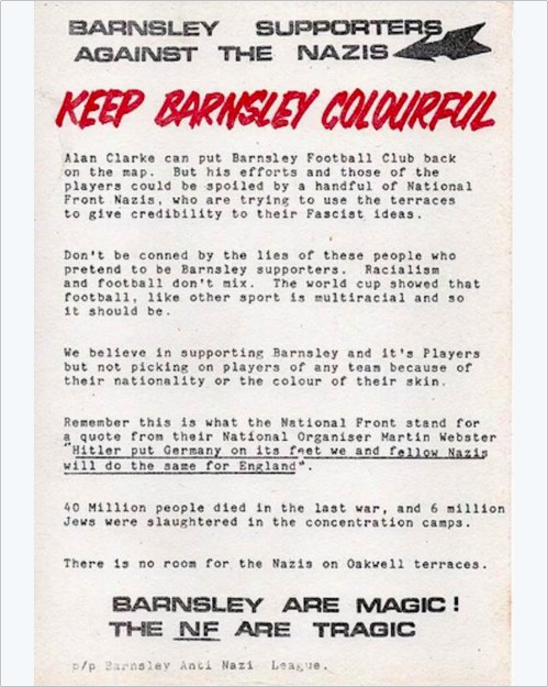 Alan Clarke (the ex-Leeds striker who joined Barnsley as player-manager in 1978) can put this club back on the map.

But his efforts and those of the players could be spoiled by a handful of National Front Nazis, who are trying to use the terraces to give credibility to their Fascist ideas.

Don’t be conned by the lies of these people who pretend to be Barnsley supporters. Racialism and football don’t mix. The World Cup showed that football, like other sport is multicultural and so it should be.

We believe in supporting Barnsley and its players but not picking on players of any team because of their nationality or the colour of their skin.

Remember this is what the National Front stand for. A quote from their national organiser, Martin Webster: “Hitler put Germany on its feet. We and fellow Nazis will do the same for England.”

40 million people died in the last war, and 6 million Jews were slaughtered in the concentration camps.

There is no room for the Nazis on Oakwell terraces.

BARNSLEY FC ARE MAGIC!
THE NF ARE TRAGIC

Excellent sign-off line. We couldn’t have put it better ourselves.