Charles ‘Chic’ Brodie was no doubt a perfectly serviceable goalkeeper in his day, we couldn’t possibly comment to the counter, but alas his 21-year professional career is generally boiled down to two memorable incidents.

The first of which happened on November 6th, the day after Bonfire Night, back in 1965 during a match between Brodie’s Brentford and their cross-London rivals Millwall at Griffin Park.

Brodie was diligently tending his goal when he heard an odd thud in the mud behind him. Lo and behold, a hand grenade had been tossed from the terraces and out onto the pitch.

As the story goes, Brodie calmly picked the grenade up, inspected it and then casually chucked into the back of his net to be disposed of at a future juncture.

Fortunately, the device was later analysed at a local police station and found to be a dummy. 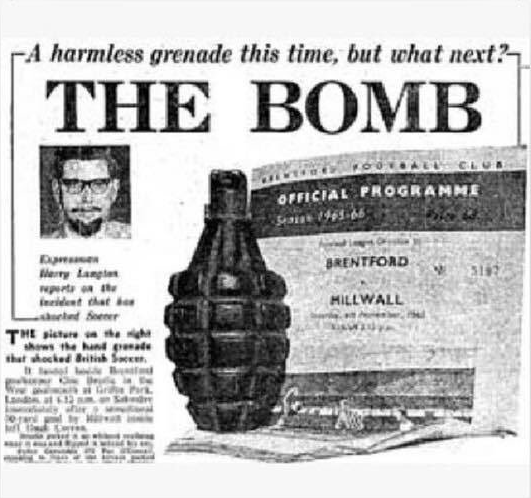 Here’s how the inception and execution of the Brodie-baiting grenade ploy came about, as fondly recalled by Jim Nash, former head of the Millwall Supporters Club:

At that time, Brentford had a bit of a fancy Dan goalkeeper called Charlie Brodie who delighted in winding up Lions fans.

And so on the Friday before the game, it was decided to give up throwing coins, etc, at him and come up with something a bit more tasty.

One of the gang had recently found a hand grenade in his father’s old kit bag which had been in the loft since the end of World War Two. And so the plot was hatched – yes this would give Brodie a serious fright…

And so on the morning of the match, said hand grenade was loaded into the back of a Mini Cooper which then headed to West London.

How do I know this? Simply because I was offered a lift to the match, and only became aware of the plot en route. And it’s a bit difficult to bail out of a Mini doing 70mph on the Hammersmith flyover

But a success it was. Brodie was terrified, pictures of a police officer putting the missile into a bucket of sand were broadcast on the BBC and the Daily Sketch Newspaper – sadly no longer with us – headlined on its front page: “HAND GRENADE SHOCKS SOCCER”

Yes the gang of four had triumphed beyond their wildest dreams.

Five years later, Brodie would have his professional career prematurely ended by a dog-induced knee injury – thus bringing about his second notable entry into the great football pantheon.