Having retired from international football three years earlier, October 1974 saw the great Pele turn out for Santos for the 662nd and final time in a farewell match against Ponte Preta.

As far as he was concerned, the legendary Brazilian striker was retiring from professional football for good just a few weeks shy of his 34th birthday.

However, the following June, Pele was coaxed back to active duty by New York Cosmos, who did so by making the veteran icon the highest paid athlete in the entire world – this despite the team finishing bottom of the NASL Northern Division the previous year.

What you see below is the “final proposition” Cosmos made to Pele while the latter was staying at a hotel in Brussels during a trip to Belgium – a cool $1million a year in flat salary for two years (along with an extra $6,000 thrown in per month during the season).

Adjusted for inflation, that equates to roughly $4.6million per annum.. 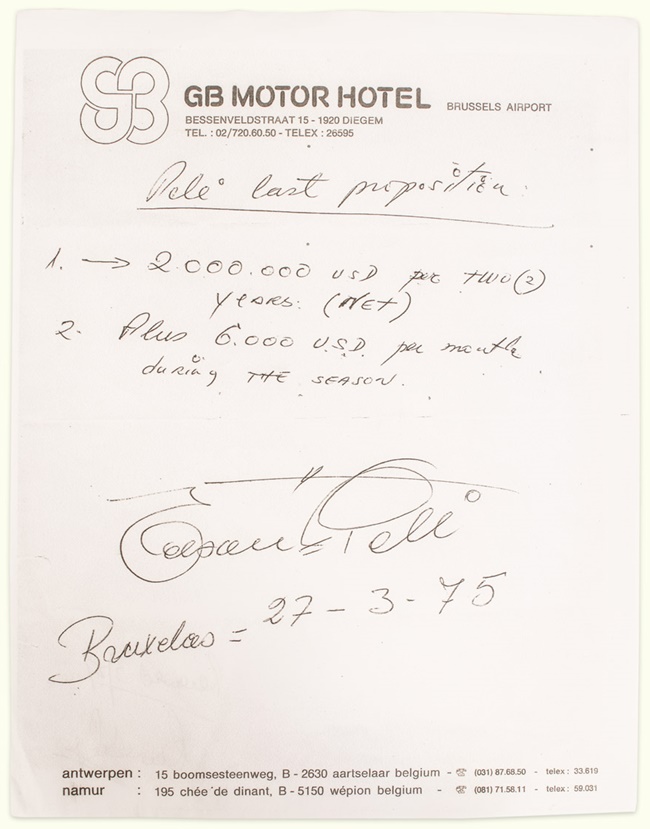 Unsurprisingly, Pele agreed the terms and swiftly made his debut for Cosmos against Dallas Tornado a few months later, in front of a TV audience of around 10million people.

Pele provided an assist and scored the equaliser in a 2-2 draw at Downing Stadium, New York…

Asked why he decided to reverse his decision to call quits on his career, Pele later recalled:

When I retired, something inside me had died. Playing football again was like therapy.

Pies suspect the $2million may have also played a part in the reasoning, but then that’s just us being overly cynical.