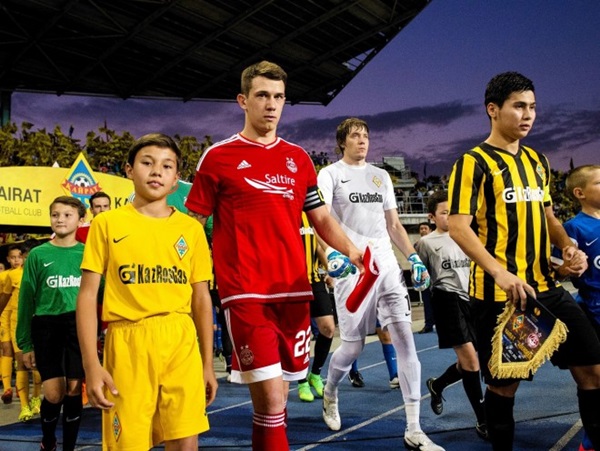 Aberdeen were already bloody knackered by this point

Aberdeen made the longest away trip in the history of European club football for last night’s Europa League third qualifying round first leg against FC Kairat Almaty, who play their home games in the south-eastern reaches of Kazakhstan.

That said, the Dons were probably left wishing they hadn’t bothered by the end of the evening, with a potentially crucial away goal proving to be the only redeeming factor in a strenuous 2-1 defeat.

As for the aforementioned journey, the Dons ended up chartering themselves a private jet to make the gargantuan 3,415-mile trip out to Almaty (the plane reportedly cost the Scottish club £200,000 to hire – twice the amount they would have received in UEFA prize money had they actually won the game).

To put that distance in perspective, Aberdeen is actually closer to New York, the North Pole and the southernmost limit of the Sahara desert than it is to Almaty as the crow flies.

Looking at it from the other perspective, Almaty is very nearly as far east as New Dehli and is actually closer to Tokyo, Singapore, Manila, the Maldives and Addis Ababa than it is to Aberdeen.

We doff our cap. We truly do.

Having travelled some 6,830 miles and paid £3,000 for their flights, at least those fans can console themselves that while Aberdeen are kicking off their SPL campaign on Sunday with another away fixture, it’s only against Dundee United – a mere 70-mile pootle down the road.