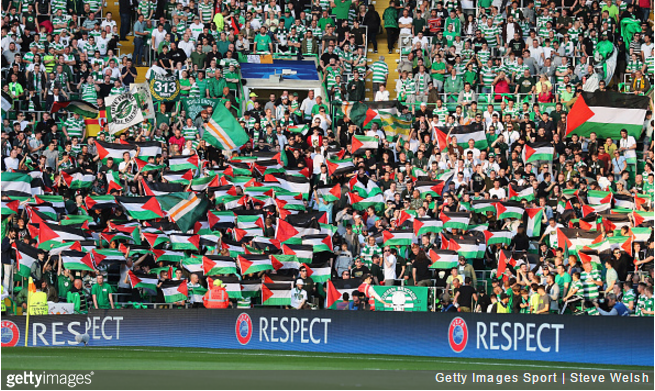 At current count, Celtic fans have clubbed together to raise more than £90,000 for Palestinian charities in response to a UEFA sanction.

Funds are being raised in an attempt to match the impending £15,000 fine that UEFA have slapped Celtic with for flying Palestinian flags in the crowd during their recent Champions League play-off tie against Israeli side Hapoel Be’er Sheva.

According to UEFA, the Scottish side are being stung as competition rules expressly forbid the display of any material deemed to “transmit messages that are of a political, ideological, religious, offensive or provocative nature”.

In retaliation, Celtic supporters’ group The Green Brigade then set up an online donation appeal in protest of UEFA’s “petty and politically partisan act”, adding that they are “determined to make a positive contribution to the game” by raising money for Medical Aid Palestine (MAP).

At the Champions League match with Hapoel Be’er Sheva on 17 August 2016, the Green Brigade and fans throughout Celtic Park flew the flag for Palestine.

This act of solidarity has earned Celtic respect and acclaim throughout the world. It has also attracted a disciplinary charge from UEFA, which deems the Palestinian flag to be an ‘illicit banner’.

So far, the total stands at a frankly astounding £92,195, which is to be split between MAP and the Lajee Centre, a Palestinian cultural hub located in the Aida Refugee Camp on the outskirts of Bethlehem – one of the aims being to help buy enough kit and equipment to help them set up their own football team called, fittingly, Aida Celtic.