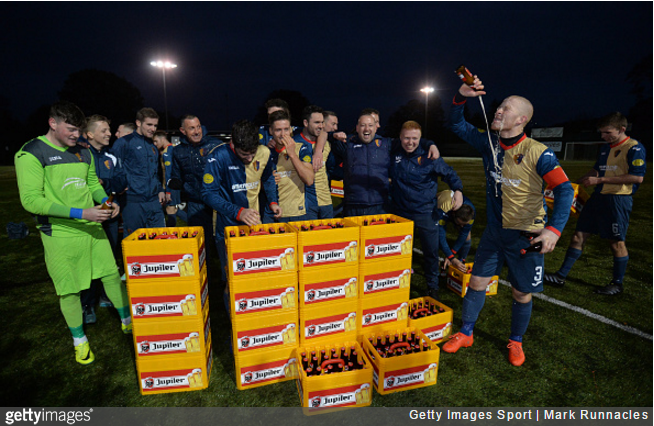 It’s not often you hear Johan Cruyff mentioned in the same breath as the Scottish Lowland League, but the two footballing spheres overlapped in joyous fashion on Saturday evening.

Indeed, East Kilbride surpassed the feats of Cruyff’s imperious Ajax side of 1971/72 by winning their 27th game on the bounce, with a 3-1 win over BSC Glasgow sealing the deal.

As such, Ajax sent a congratulatory convoy to K-Park in the shape of a van laden with 27 crates of beer and a special video message from the Eredivisie side’s marketing director, one Edwin van der Sar…

Edwin Van Der Sar video presentation to @officialEKFC! Can not believe this! 😂 pic.twitter.com/bXV5AfOJtv

Ajax went 26 games unbeaten between October and March of the 1971/72 season before Go Ahead Eagles ended their streak on April Fool’s Day.

Unfortunately, despite eclipsing Cruyff and company, East Kilbride are unlikely to have their 27-win run formally acknowledged as a Guinness World Record due to the fact that it didn’t take place in a ‘top’ league.

Still, 27 crates of Jupiler should help ease the pain.