Brechin City have become as the first Scottish club in over a century to go an entire league season without picking up a single, solitary win.

The relegated Scottish Championship club’s humiliating 5-1 defeat by Queen of the South on Saturday sealed the incredible feat, leaving City bottom of the division and winless in 36 league matches.

Darren Dods’ side ended the campaign 26 points adrift at the bottom of the division, having picked up just four points from four draws. 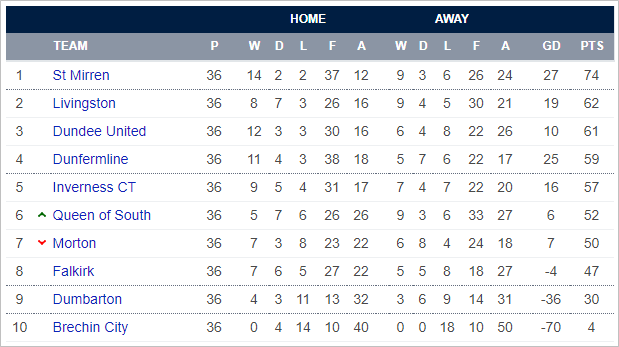 It’s the first time a senior Scottish side has gone winless since the mighty Vale of Leven pulled off the same feat way back in the 1891/92 campaign, 126 years ago.

Dundee ended their 1898/99 campaign in the old Scottish Division One (i.e. top flight) with just four points and Clyde racked up the same tally during an 18-game season back in 1899/1900, but both of those tallies included one league win and a draw

Brechin’s campaign, meanwhile, featured a miserable run of 17 consecutive defeats, with the club picking up just four points from the 108 available, losing 32 games along the way.

Brechin fans deserve a pint tonight. They become the first Scottish side in 126 years to go through a whole season without a win. P36 W0 D4 L32 . Goal difference -70. There’s always next season.

What’s more, City’s points tally is a record low in the Scottish second tier and the worst in any division in the ‘three-points-for-a-win’ era. It’s also the joint worst in entire history of organised Scottish football.

It is worth pointing out, however, that Brechin are one of only two teams operating on a part-time basis in the Scottish Championship. The other, Dumbarton, finished second bottom.

Brechin won promotion from League One via the play-offs last season, following a miraculous campaign in the third tier.

Unfortunately for all concerned, the fairy tale was not allowed to roll over into this season.