So, you may well have noticed there’s a kerfuffle in Scotland right now, regarding referees and a strike. You may not know how it came about, or what happened to make it such a big deal. Granted, you may not care, but tough – I’m going to tell you all about it.

Celtic fans have often been accused of being paranoid. Way back in the 1990s, a Celtic supporters club hired a private detective to follow a referee, and found him drunk in the vicinity of an Orange Walk, and things haven’t got much better since then.

The flashpoint recently occurred during Celtic’s match against Dundee United at Tannadice on a Sunday afternoon. Referee Dougie McDonald awarded Celtic a penalty, which he then overturned – rightly, in my opinion – after appearing to speak to his assistant. Celtic boss Neil Lennon, never the calmest of men at the best of times, was apoplectic. Celtic won the game with a late winner in any case, but Lennon was adamant that his team should have been awarded the penalty and wanted to know why it was rescinded.

Here begins the problem… McDonald, for whatever reason, deceived Lennon. He claimed that the linesman signalled him over to dispute the penalty, and this was the story that went out officially, in the report issued by the head of refereeing, Hugh Dallas (more on him shortly). 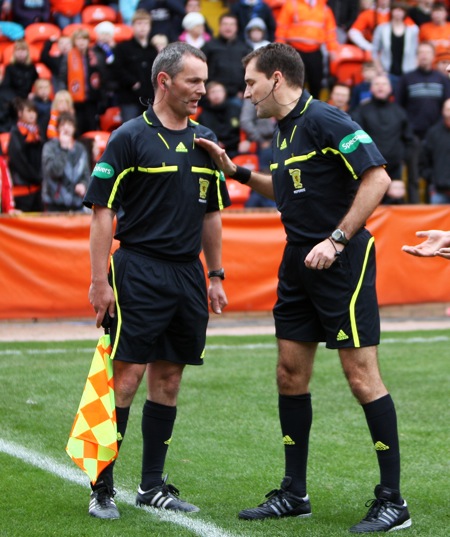 When the trouble started: referee Dougie McDonald (right) talks to assistant Steven Caven during the SPL match at Tannadice, on 17 October 2010. McDonald overturned his own penalty decision and appeared to use Craven as the fall guy

Sometime on Sunday evening the assistant referee, Steven Craven, decided that he wouldn’t be part of a cover-up and told Dallas and McDonald that he wasn’t going to take the blame. On Monday, aware that there had been a cover-up, Dallas went on live radio and took Celtic and Lennon to task, claiming all sorts of things and that it was unfair to pressurise referees in this situation – and continued the lie that the assistant ref, Craven, had first called over the referee.

The situation rumbled on, in the way that only controversies involving the Old Firm can in Scotland. During the week, the official observer’s report on the game was leaked on the web – with McDonald’s story in place. It then became clear that Craven really had reached the end of his tether, and he handed in his resignation. Turns out he was planning on leaving in January anyway, but this whole mess had made him revise his decision and leave earlier.

In an EXCLUSIVE and DRAMATIC interview with a Scottish Sunday newspaper, Craven lifted the lid on what he said was a culture of bullying and intimidation amongst the referees in Scotland, starting at the top with Dallas. In the official version of events, he was cited as calling over the ref in the aftermath of the penalty incident – both Dallas and McDonald claimed he’d shouted “Dougie! Dougie!” over the mic system the officials use.

Craven said that in reality, McDonald ran over to him and said “I’ve f**ked up” and changed the original penalty decision to a drop ball. Again, it’s still unclear why he didn’t just admit to this after the game rather than lie to Neil Lennon, and haveHugh  Dallas and the official report endorse this falsified version of events.

He went on to state that he’d been marked down in the past by observers for not getting a Celtic player sent off, and for being involved in a Rangers player being booked. Further than that, he painted a picture of Hugh Dallas as a man who bullied junior officials, loved the spotlight and craved to be centre of attention. The country’s sports pages went mental; message boards went into meltdown, fans on both sides of the Old Firm divide started pointing fingers… and Celtic? The club said nothing.

Hugh Dallas released a statement saying he was consulting lawyers for possible legal action against Craven, something which at time of writing hasn’t materialised. As if this scandal wasn’t enough, an email from Dallas using his official email address also leaked on to the internet. During the recent Papal visit, he’d sent an email with a picture poking fun at the Pope and the Catholic church regarding the accusations of child abuse. The SFA said they would look into it, internally. Dallas said nothing.

Meantime, football carried on, as it tends to do. Celtic had some decisions go against them during a game at Hearts, including a red card for Joe Ledley; Neil Lennon was sent to the stands as a result of this and he let fly with both barrels after the game.

Refereeing in Scotland had never been under such scrutiny, and accusations and conspiracy theories were flying left and right. Celtic held their AGM, and chairman Dr. John Reid also waded in, demanding that Dougie McDonald should resign or be fired, and that Celtic would welcome a shake up of the entire refereeing system. This may have been the straw that broke the camel’s back, as the refs decided that was enough and voted to go on strike this coming weekend.

Where does this leave Scottish football? Well, to outsiders, it’s in the dark ages. From my point of view as a Celtic fan, I think Celtic have a point about a referee lying to Lennon. It shouldn’t happen. Not just to Lennon, but to any manager. The referees demand respect; they should also have the same respect for others.

I really don’t know why McDonald felt the need to lie about the decision; I really, really don’t know why Dallas and the powers that be felt the need to further that lie. All that needed to be done was for McDonald to come out and say he made a mistake. As a result of the scandal, Dallas has left his post, and Stewart Regan, the SFA chief executive, has promised to overhaul the national governing body’s disciplinary processes to avoid a repeat of the crisis which led to the strike – when referees were drafted in from Luxembourg, Malta and Israel – last weekend.

Celtic aren’t blameless in this. Their desire to force the issue has done more harm than good. In the long run, it damages their ability to relate to referees. Every decision is now going to be under a microscope – no referee in his right mind is going to look forward to a Celtic match, let alone an Old Firm tie.

For my money, Celtic made their point, that the lie was wrong. That’s where it should have ended from their side, and left it to the SFA to take further. Pushing forth demands about this and that, and allowing the conspiracy theorists to flourish has just clouded the real talking point.

What happens now is anyone’s guess, but one thing is for sure. Refereeing in Scotland isn’t going to get any easier in the near future, although with Dallas gone it might help matters slightly. Whatever, Celtic may just have made another rod for their own backs.

Update: In a further twist to the saga, Dougie McDonald has quit this week. There is now a clean slate, it seems. And about time too.