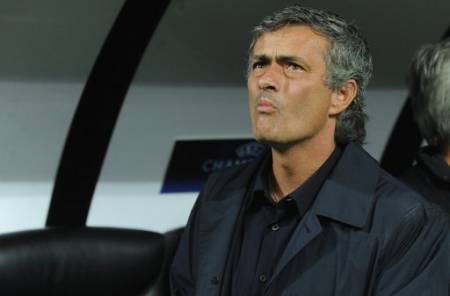 Lega Calcio have issued Jose Mourinho with a three-game touchline ban after the Inter Milan coach made ‘handcuff’ gestures to the officials during his side’s 0-0 draw with Sampdoria at the weekend.

The offending gesture was made in retaliation to Inter being (fairly harshly) reduced to nine men before half time but ‘The Special One’ obviously didn’t stop there. The official statement from judge Giampaolo Tosel reads;

“[Mourinho] is suspended for repeatedly challenging the officials through blatant actions.

The suspension is also applied due to “using insulting expressions towards the referees and his assistants” and “questioning the presence of the federal prosecutors by the Inter and Sampdoria benches during the second-half of the game.”

It’s good to see Jose’s persecution complex hasn’t been tempered by his time in Italy!

The Nerazzurri have also seen four of their players issued with suspensions in relation to incidents during Sampdoria game. Walter Samuel and Ivan Cordoba will receive bans for the red cards they picked up during the game, Esteban Cambiasso will be punished for attempting to punch a Sampdoria player at half time and Sulley Muntari will face time on the sidelines for repeatedly insulting the officials after being substituted.