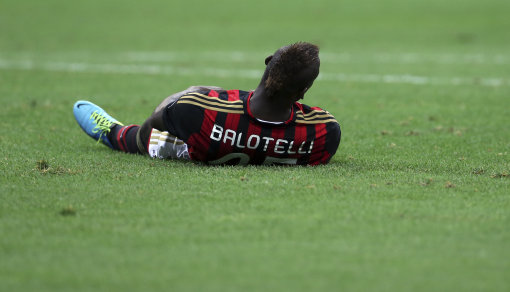 Given that he’s involuntarily become the poster boy of Italian football’s struggle against racism, Mario Balotelli was penciled in to meet with the country’s Minister for Integration, Cecile Kyenge, earlier this week to discuss the state of the nation and their little prejudice problem.

Kyenge (Italy’s first black minister) pressed ahead and chatted with several other members of the Italy squad as planned, but the man she really wanted to talk to failed to turn up after his alarm clock didn’t go off on the morning of the meeting and he slept right through it.

Now, Gazzetta Dello Sport have made it clear that it wasn’t compulsory for the Azzurri to attend the meeting with the minister, though that didn’t stop her being rather disappointed when Balotelli no-showed, telling the paper:

“Balotelli said he did not come because he preferred to sleep, so we must respect his transparency. For me Balotelli was a person I wanted to see, but I also wanted to meet the whole squad also.

“I stated that this battle against racism is something we have to all be against, as a team, in fact, and not everyone for themselves.”

To be fair, Mario wasn’t tempted with Scalextric,  bouncy castle full of fireworks or an elephant ride around the grounds so what did she expect?