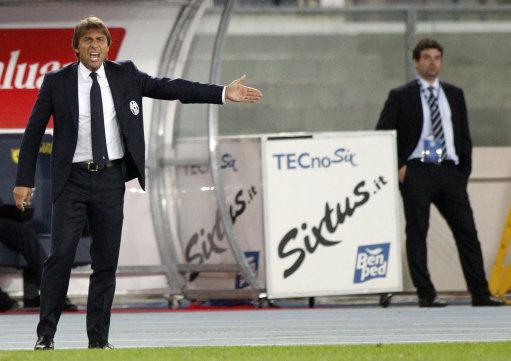 Juventus coach Antonio Conte has warned his players that they will face a one-month ban if, upon being substituted, they do anything other than return to the bench and watch the remainder of the game.

Conte’s declaration comes after Andrea Pirlo wafted straight down the tunnel in a huff after being subbed off for Claudio Marchisio in the 66th minute of the Bianconeri’s 1-2 win against Chievo in Verona last night.

“As far as Pirlo is concerned, there was no need for a clarification because he didn’t do anything which was not allowed.”

“Before it, there had never been the need to have a rule, but from now on there is a rule and it is valid for all players.

“The rule is that when a player leaves the pitch, unless he is injured and is on a stretcher and has to see the doctor, he has to stay on the bench to watch the match with his teammates.

“This rule didn’t exist before, but now it exists and it has to be followed by everyone otherwise players will have to pay a fine to the club and will have to remain out of the squad for a month.”

In fairness to Pirlo, he did need to urgently reapply his gentleman’s beard pomade, which pretty much counts as an injury when your facial hair is as luxe and opulent as his.