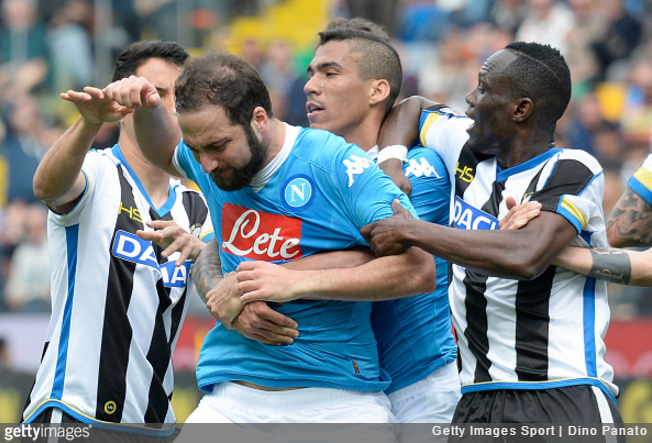 Napoli still fancy they have an outside chance of pipping Juventus to the Scudetta, positioned six points behind the Serie A leaders with seven games left to play.

However, there aspirations of usurping the front-runners may have just disappeared in a puff of smoke with the news that Gonzalo Higuain has been hit with a four-match ban for his little temper tantrum during the 3-1 away defeat against Udinese at the weekend.

Higuain picked up a second booking after a minor dalliance with defender Felipe. Then, something went pop and the Napoli striker had to be smothered by his teammates as he went pushing the referee and flailing around the pitch with flared nostrils and bulging forehead veins…

The Italian Football Federation (FIGC) have today announced that Higuain will now be suspended for Napoli’s next four games, meaning he’ll miss potential crunch ties against Roma and Inter. He’s also been fined €20,000 for his troubles.

The Argentinian goal-hound is by far and away the top scorer in Serie A this season with 30 goals in 31 appearances. That’s over double the amount of goals registered by the next two names on the list – Juventus’ Pablo Dybala and Milan’s Carlos Bacca – who both have 14 goals to their respective names.

He was also desperately shooting down ex-Milan legend Gunnar Nordahl’s post-war Capocannoniere record for goals in a single season (35), but that seems to have become ever so slightly improbable all of a sudden. Six goals in three games is no mean feat.

Anyway, the real winners in all this – quite literally, really – are Juventus, who have seen their only title rivals stripped of their main goal threat in front of their eyes.

Congratulations on Scudetto number 31 (or 34, depending who you ask), chaps.