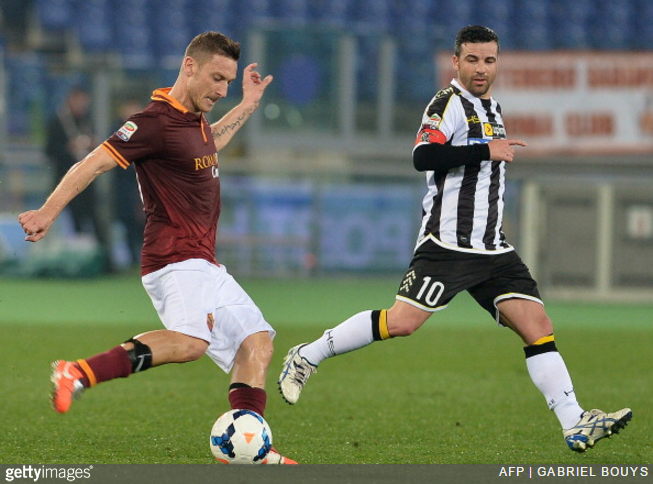 Ex-Udinese stalwart Antonio Di Natale has called on Roma to retire the No.10 shirt as and when current incumbent Francesco Totti calls it quits.

Totti signed a new one-year contract extension over the summer to keep him playing past his 40th birthday but is fully expected to retire at the end of the current season.

When that time inevitably comes, Di Natale reckons it’s only right that the Giallorossi give their “beautiful and extraordinary” veteran the send off he so richly deserves.

Di Natale, who proudly wore the No.10 shirt for Udinese for 12 years before stepping down in May, told Gazzetta dello Sport:

It’s a very heavy shirt It’s worn by someone who has something extraordinary, off the cuff, and did important things.

Totti? He’s a friend, a beautiful person and an extraordinary player. I have his jersey and I’m proud.

Even in his case, the club (Roma) will decide what to do with his No. 10, but I wouldn’t give it to anybody.

Frankly, it’s the least Roma could, and probably will do to commemorate Totti’s immense dedication and service over the course of the past 22 years.

The man deserves a big bronze statue in all four corners of the stadium.