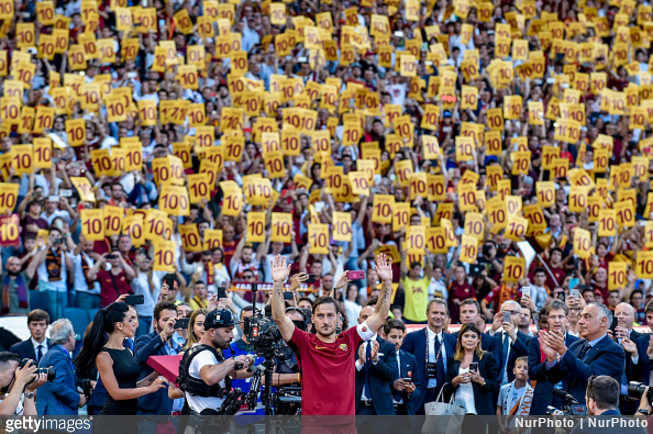 If you thought John Terry’s decision to bow out by throwing himself a mandatory mid-match guard of honour was questionable, then just wait until you hear the initial draft of Francesco Totti’s farewell ritual.

As revealed by Roma teammate Juan Jesus, it would appear that Totti very slightly lost his mind in the build up to Roma’s final Serie A fixture of the season against Genoa a Sunday or two ago – his 786th and final appearance for his boyhood club.

Indeed, at one stage in the planning, Totti was planning to wave goodbye to his adoring public by deliberately missing a penalty with his last ever kick for the club.

Jesus explained the idea in an interview with Brazilian station Radio Atlantida (via ESPN FC):

Totti was nervous all week. One day he would say, ‘I’m quitting,’ and the next he would be, ‘I’m going to keep playing.’

Before [the Genoa match], we all got together in the dressing room and he said, ‘If I get a penalty, I won’t score it, I’ll kick the ball into the Curva.’

There wasn’t a penalty so instead he sent an autographed ball into the Curva after the game.

It’s not like the Genoa game was a dead rubber either. In fact, Roma were still vying for second place with Napoli in the race to ensure automatic qualification for the Champions League group stages.

The Giallorossi only managed to beat Genoa 3-2 thanks to a dramatic 90th-minute winner, thus rendering Totti’s ploy to shank any prospective spot-kick sound even more ludicrous.