It’s been an iffy few days for Serie A referee Piero Giacomelli, who currently finds himself at the centre of an Italian football federation (FIGC) investigation into an alleged breach of their stringent regulations pertaining to personal social media use.

If you’re struggling to place the name, Giacomelli was the referee who, after denying Lazio a penalty and administering Ciro Immobile with a soft red card during a recent league game against Torino, became embroiled in a vendetta that saw hundreds of angry Biancoceleste fans bombard his cafe’s Tripadvisor page with negative reviews.

According to Gazzetta dello Sport, the irked Lazio fans managed to pinpoint the cafe after rooting out Giacomelli’s personal Facebook page, which was swiftly deleted the following day. 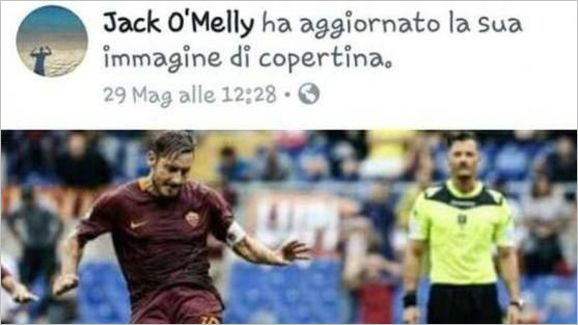 Giacomelli’s Facebook account was set up using a clever pseudonym – Jack O’Melly – and also featured an image of the official in close proximity to Roma legend Francesco Totti, thus spiking the Lazio ire.

By regulation, the referees can not use nicknames to prevent their profile being identified on a social network. The referee (Giacomelli) was registered as “Jack O’Melly”, and this triggered the investigation.

The reasons for the opening of the investigation should not be attributed solely to a photo of the [Giacomelli] with Totti posted […] but also to the regulation expressly prohibiting “participation in discussion groups, e-mails, forums, blogs, social networks or similar in an anonymous way.”

It’s also reported that a group of Lazio fans have filed a class action lawsuit against Giacomelli and Marco Di Bello, the video referee on duty for the aforementioned Torino match, with law firm Previti seeking compensation on grounds of supporters having their right to “live their sporting passion while protected from illicit conditioning” impinged.

In short, a busy week just got a heck of a lot busier for Mr Giacomelli.