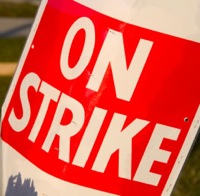 Serie A players plan to go on strike on September 25 and 26 because of a dispute over contracts, the Italian footballers’ association announced today.

“The association, in perfect symphony with the players of Serie A, has decided not to go on the field for the fifth round of matches of the Serie A championship on Sept. 25 and 26 in protest against requests to impose new contractual rules,” AC Milan’s Massimo Oddo told a news conference.

Why are they planning to strike? Well, it’s complicated, but a collective contract between the association and the league guaranteeing players’ rights expired in the close season and attempts to draft a new deal have so far faltered.

Allied to the absence of an agreement, the players’ association has reportedly grown concerned by the trend of Serie A clubs trying to force players to move in the last year of their contracts, when they are no longer wanted.

Of course there’s still time for a strike to be averted, and no doubt the TV networks will get involved quickly, as the prospect of losing an entire weekend of lucrative top-flight football will cause major poopage in the pants region.