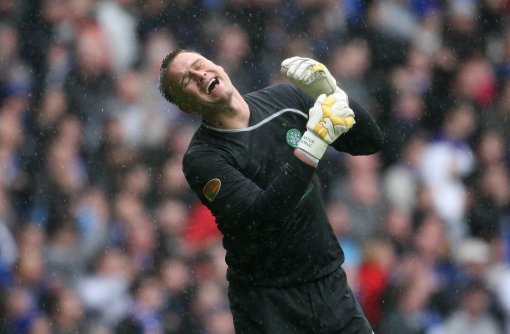 Mad as a box of clinically insane frogs

Former Celtic ‘keeper Artur Boruc has admitted that his slow start to life at new club Fiorentina (he is yet to start a game since joining La Viola over the summer) is due to the fact that he has had to reportedly shift three stones of blubber that he piled on during his time in Glasgow.

Speaking on Polish television, Boruc claimed that the fact he had no real competition for his place at Parkhead meant that he grew increasingly complacent about his position at the club;

“In Glasgow, I became a bit lazy because they all loved me no matter how I played. I loved Glasgow, however, at some point in life you must change.

I know that at Fiorentina I have to work hard because, compared to Celtic I have to earn my space. Now is a different situation that involves more work for me.

I came to Fiorentina because I wanted to go to play in a better championship. I love Italy, I feel good here and I have also begun to speak Italian.”

Whereas love is a surefire way to put on three stones, I can’t help but wonder if a certain pair of ‘golden arches’ may have also had something to do with it…