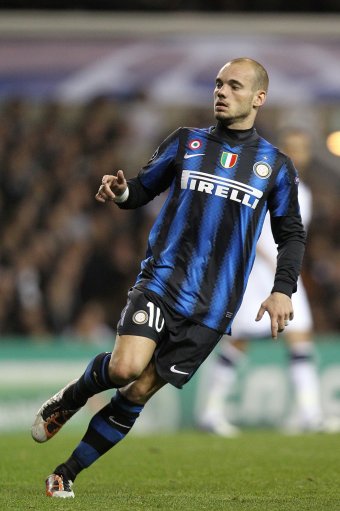 Inter Milan midfielder Wesley Sneijder has been diagnosed with anaemia (a deficiency of iron in the blood) after briefly passing out at half-time during Saturday’s Serie A tie with Brescia.

“I started to shake and felt pain in my entire body. In the changing room I got sick and passed out briefly.

“My heart and blood pressure were checked immediately. Later I traveled to the Netherlands for a second opinion.

“The conclusion was that I have anaemia and my whole body is exhausted.”

Having helped to steer Inter to a treble of Serie A, Coppa Italia and Champions League titles last season, then haul Holland through to the World Cup final over the summer, the general consensus seems to be that Sneijder is just well and truly knackered.

The Dutchman was left out of Inter’s midweek fixture against Lecce last night for ‘health reasons’, although the Nerazzurri‘s press office have declined to comment on the matter.

Pies’ prescription: Plenty of lentil soup, and a couple days laid up watching endless repeats of Diagnosis Murder should do the trick.