Milan living legend bows out to the sound of jeers and whistles. He didn’t deserve this 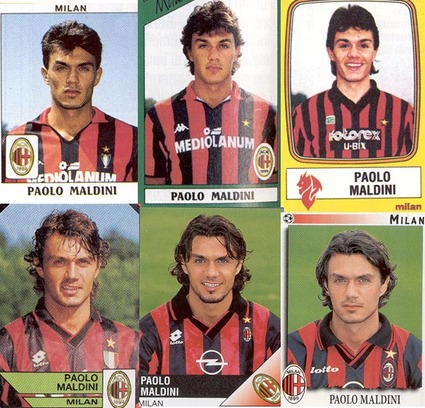 Paolo Maldini is the greatest defender of his generation, perhaps of all time. His career at Milan (he was a loyal, one-club man) spanned 24 years; Ryan Giggs would have to play at Man Utd for another six seasons to match that.
Maldini’s magnificent playing career ended on Sunday, in a 3-2 defeat at home to Roma (it was his 900th appearance!). Shame about the result, but Maldini was roundly cheered by both sets of fans after the final whistle. Except, that is, for some of Milan’s more hardcore fans (aka “Ultras”), who used the occasion to champion another great Milan defender, Franco Baresi, while at the same time jeering Italy’s most capped player.

“Thanks captain. On the pitch you were an undying champion but you had no respect for those who made you rich,” read one of the Ultras’ banners.
“For your 25 years of glorious service you have the thanks of those who you called mercenaries and misers,” read another. [translation @ Guardian]
The fans in Milan’s Curva Sud (the end where the hardcore supporters gather) also held up a massive Milan shirt with the number six and the words: “There is only one captain, Baresi”.

Charming, huh, and not exactly subtle. It’s disgusting that supporters should treat a genuine legend in this way, but then the Ultras have never bowed to player power, while Maldini never made great efforts to get on their side – he just did his job, and did it better than anyone. Still, this was not the place nor the time to air such grievances. Shame on you, Ultras.
Baresi himself commented on the fans’ crass behaviour: “I regret this, because Paolo does not deserve it,” he said on Monday.