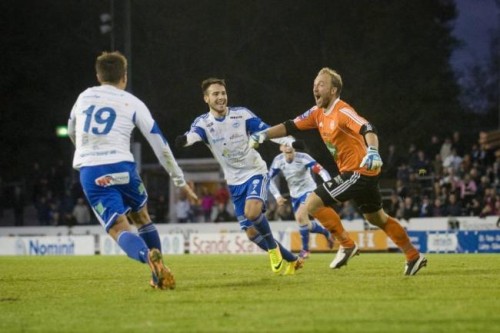 Things are a bit tight down at the bottom of the Superettan (i.e, the Swedish second tier) and points are becoming ever more crucial as the league enters its final stages, so it’s little wonder that the Värnamo players went ever so slightly beserk when they managed to carve themselves out a 95th-minute equaliser against fellow relegation botherers Varberg on Sunday evening – not least as the goal came through their 35-year-old keeper, Bjorn Akesson.

With his side 3-2 down at home against the team level with them on points in the two Superettan relegation play-off places, and with just seconds of the game remaining, Akesson charged forward for a late corner and duly found the ball sitting up sweetly in front of him.

Completely undaunted, the veteran goalie swiveled and sent a well-struck, low volley into the far corner as pandemonium ensued…

Fortunately for Värnamo, however, they now have a secret weapon!