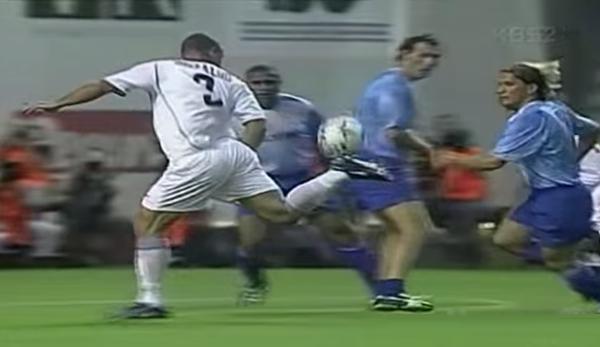 Here we see Ronaldo in his prime, after just completing his first season at Real Madrid, obliterating his peers with consummate ease in a charity match between the Luis Figo Foundation XI and a team of UNICEF All-Stars at the Bessa Stadium in Porto, Portugal.

After chopping and changing a few passes back and forth with his new work colleague Raul on the approach, Ronaldo rescues a slightly errant return ball by dinking it over his head and into his path with a flick of his heel.

Before you know it the ball’s gliding neatly inside the far post and O Fenomeno is receiving yet another standing ovation from everybody in the stadium, including the defenders he’d just so effortlessly lain to waste…

My god, what a footballer.