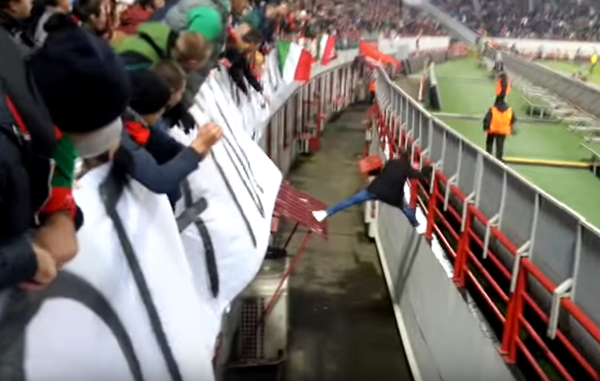 While we’re sure Lokomotiv Moscow’s 1-1 draw with Besiktas in the Europa League last night made for perfectly acceptable viewing, the real entertainment was being generated in the crowd.

At one point an intrepid Lokomotiv fan summoned up the gumption to make his way out onto the pitch in time honoured fashion.

After having his fill out on the turf, the fan began galloping back to the safety of the terraces while pursued by several stewards.

Having made it over the perimeter wall, the fan was then faced with a secondary obstacle: the Stadion Lokomotiv’s massive bloody moat.

Thankfully, via a mix of agility and cunning, our plucky hero made it back to his seat…

Sometimes you’ve just got to doff your cap and applaud the effort.