At 34 years of age, Zlatan Ibrahimovic may not get many more chances (if any) of appearing in a major finals. But courtesy of Sweden’s 4-3 aggregate win against neighbours Denmark in the play-offs, Euro 2016 will be graced by the great man’s presence. In the second-leg of the play-offs on Tuesday night in Copehagen, the PSG superstar once again produced the goods, conjuring up an outstanding long-range free-kick which gave Kasper Schmeichel no chance in the Danish goal. 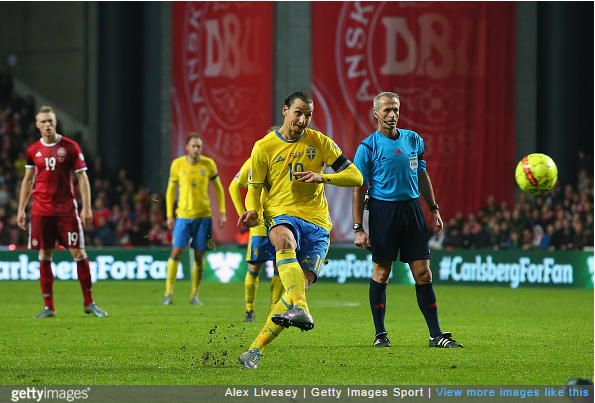 Already 1-0 up on the night courtesy of another goal from Ibrahimovic, the big Swede curled home the cracker on 76 minutes to seal the deal for the visitors and book their place in next summer’s final…

A superb goal from a superb player. Athough the Swedes were still left to sweat until the very end, with goals from Yussuf Poulsen and Jannik Vestergaard setting up a dramatic last few minutes, with the game ending 2-2  on the night. Still, France 2016 wouldn’t have been the same without Ligue 1’s brightest star on show, would it?