Lionel Messi, Luis Suarez and co. have been at it again on Sunday, helping all-conquering Barcelona to another thumping win, this time via a 6-1 hammering of Celta Vigo at the Nou Camp.

Messi bagged a superb free-kick in the mauling while ex-Liverpool striker Luis Suarez nabbed a hat-trick, one of which came courtesy of a cheeky penalty ruse. 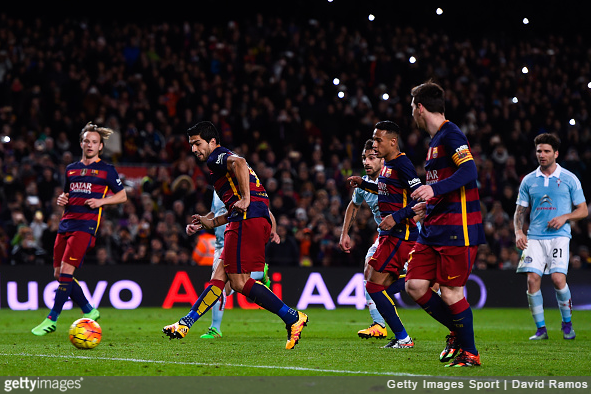 With the score at 3-1, Messi was fouled in the box. On 299 league goals, everyone expected the Argentine genius to pop home his 300th from the resulting spot-kick. However, instead, the pint-sized magician passed the ball sideways, leaving Suarez to slot home and complete his own hat-trick.

However, judging by the commentator and indeed the reaction to the goal on Twitter, you’d think Messi and Suarez and invented a whole new way of taking penalties, which is rather unfair to the great Johan Cruyff and Jesper Olsen, who pulled off the cheeky trick for Ajax back in 1982…

Still, fair play to the Barca boys, who know go three points clear of Atletico Madrid at the top of the La Liga table, and with a game in hand too!

Oh, and with Neymar also finding the back of the net, the Holy Trinity of Messi-Suarez-Neymar have now bagged a not too shabby 208 goals between them since the start of last season. 208!!!